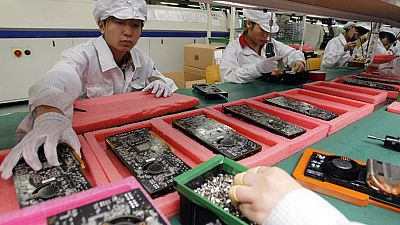 Apple is looking to focus its production elsewhere after it warned China’s strict lockdowns were hurting its supplies.   -   Copyright  AP Photo
By Jack Ramage  •  Updated: 23/05/2022

Apple is looking to increase its production outside of China, according to a report by the Wall Street Journal, citing Beijing’s zero-COVID policy as one of the primary reasons.

According to the report’s anonymous sources, Apple is telling suppliers that it wants to expand production elsewhere, including in India and South-East Asia.

Currently, both India and Vietnam only produce a small percentage of the company’s products.

Apple is heavily reliant on China

Apple has been reliant on Chinese manufacturing for over a decade, with analysts estimating that 90 per cent of the company's products are made by contract manufacturers in China.

This reliance has led Apple’s success to become vulnerable to changes in COVID-19 policies enacted by the Chinese Communist Party.

Apple warned last month its sales could tank as much as $8 billion (€7.5 billion) in the quarter ending June 30 2022 due to supply chain shortages caused by China's strict COVID-19 policies.

Apple supplier Foxconn shut down factories near Shanghai last month due to a surge in cases.

More recently, Quanta Computer, which produces three-quarters of Macbook products, was shut down due to pandemic measures.

According to Reuters, this closure happened even though the company maintained a “closed-loop” campus to prevent the spread of the virus.

Relocation may not be so straightforward

In April, Apple’s CEO Tim Cook said the losses seen over the last quarter were attributed to both disruptions caused by the pandemic and an industry-wide shortage of silicon.

Despite the rising number of reasons why US companies may need to re-think their relationship with Chinese manufacturers, experts warn the transition may not be straightforward.

In particular, the Wall Street Journal report states that Silicon Valley firms like Apple have spent decades building assembly hubs, infrastructure and pools of skilled talent in the country.

Nick Marro, global trade leader at The Economist Intelligence Unit, told CNBC “supply chain diversification is quite tricky because people always talk about it, and boardrooms love to discuss it, but often at the end of the day people find it’s difficult to implement”.

Apple did not immediately reply to Euronews Next’s request for comment.

How Meta’s metaverse vision will change the future of communication

How being authentic is key to Adidas appealing to conscious consumers