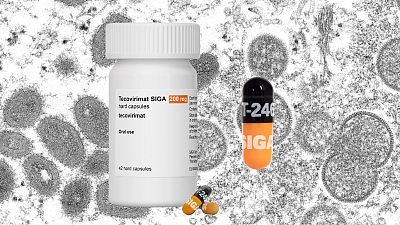 A US pharmaceutical company says it’s in talks with European authorities seeking to stockpile its antiviral drug for monkeypox amid an unusual international outbreak of a virus that can be deadly in up to one in 10 cases.

SIGA Technologies, a health security firm whose research was funded by the US government to address the threat posed by biological weapons, has developed an antiviral known as tecovirimat to fight smallpox and related viruses, including monkeypox.

Tecovirimat was approved to treat smallpox in the United States, where it’s sold as TPOXX.

Earlier this year, the European Medicines Agency (EMA) approved tecovirimat not only for smallpox, but also for monkeypox and cowpox, which are caused by viruses belonging to the same family of orthopoxviruses.

In recent days, an unusual outbreak of monkeypox cases in Europe and North America - instead of Africa where they’re typically reported - has fueled interest in tecovirimat.

“As you might imagine, a number of the jurisdictions where cases are being found have contacted us and are interested in acquiring the drug as soon as possible,” Dennis Hruby, chief scientific officer at SIGA Technologies, told Euronews Next on Friday.

How does tecovirimat fight monkeypox?

“Our drug will stop further progression of the disease and then allow your natural immune system to kick in and eradicate the virus,” Hruby said in an interview.

The drug “traps the virus within the infected cell so it can't spread” but it still lets the immune system react to the viral antigens attacking the body, he explained.

“So that while you're on the drug and hopefully being saved from further disease, you're also arming your immune system and getting a protective immune response," Hruby added.

“We've had the opportunity to use the drug in a number of compassionate cases in monkeypox patients. So I'm very optimistic this is going to be an effective drug”.

However, for medical confidentiality reasons, he would not say whether the antiviral had been given to any of the patients in the recent outbreak.

Tecovirimat is typically administered as an oral capsule twice a day for 14 days, but on Thursday the Food and Drug Administration (FDA) also approved the company’s new intravenous (IV) formulation, for patients who are unable to swallow.

Patients with late-stage monkeypox might have trouble swallowing because they’re comatose, or because the lesions caused by the disease also affect the mucosal membrane, inside the mouth. “And so you might have a very, very sore throat,” Hruby said.

Who has this antiviral?

Since the EMA’s approval of the drug in January, SIGA has been in talks with “a number of countries in Europe about potentially stockpiling this drug,” Hruby explained.

“Those (discussions) haven't been completed yet. They're obviously accelerated under the current situation”.

He declined to go into detail but said these talks were being held with national governments as well as the European Commission.

The Commission told Euronews it could not comment on negotiations with individual companies. But it said it was in close contact with member states, the EMA, industry and international experts to share information on the monkeypox outbreak and work on procuring “diagnostics, treatments and vaccines”.

SIGA struck a deal with Canada’s health authorities last year to purchase up to $33 million (€31.25 million) worth of treatment by 2026, while the United States already has 1.7 million courses of tecovirimat in its strategic national stockpile.

Just last week, the US Department of Defense (DoD) awarded a contract to SIGA for the procurement of up to $7.5 million (€7.1 million) of the antiviral.

Hruby said the DoD is specifically interested in potentially using the drug for post-exposure prophylaxis - before an infection is even confirmed.

“In the US, the drug is only approved to treat symptomatic smallpox, but in fact if you use the drug earlier, when somebody has been exposed or thought to be exposed, you can completely prevent, we believe, any disease whatsoever,” he said.

“We're currently funded by the DOD to seek regulatory approval for that indication and are in the midst of a couple of clinical trials to finish that up. So they're just getting ahead of the curve, if you will”.

SIGA Technologies currently produces about 200,000 courses of treatment of tecovirimat per year to supply the US government, but it’s in talks with other authorities to boost this capacity, Hruby said.

He would not say how much or how fast production could be ramped up. “But rest assured, we're having those conversations currently”.

Shares of SIGA Technologies closed up 43.3 per cent on Friday. Shares in Chimerix, another US company that developed a smallpox antiviral, rose 6.8 per cent.

In June 2021, the FDA approved Chimerix’ antiviral brincidofovir (sold under the brand name Tembexa) for the treatment of smallpox, but the drug also proved effective in animal studies against variola virus and other closely related orthopoxviruses.