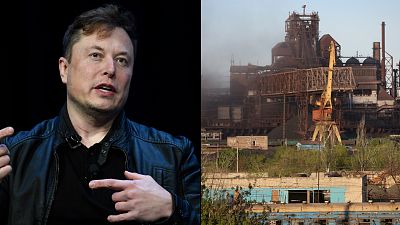 A Ukrainian commander among the fighters besieged by Russian forces in the Azovstal factory in Mariupol appealed directly to US billionaire Elon Musk on Wednesday for help in saving them.

Taking to Twitter to plea for help from the founder of SpaceX and Tesla, Sergei Volyna, commander of the 36th Marine Brigade in Mariupol, said: "People say you come from another planet to teach people to believe in the impossible".

"Our planets are next to each other, as I live where it is nearly impossible to survive," he tweeted.

"Help us get out of Azovstal to a mediating country. If not you, then who? Give me a hint".

Following an appeal on Twitter in February from Mykhailo Fedorov, Ukraine's vice prime minister, SpaceX's Starlink satellites were deployed over Ukraine to supplement the country's Internet services which have been disrupted during Russia's ongoing invasion.

Kyiv said this week that more than 1,000 soldiers, many of them wounded, were still in the bowels of the steel site, which houses an extensive Soviet-era underground labyrinth.

It is the only pocket of resistance in the strategic port city of Mariupol, which is now under Russian control.

Women, children, and the elderly were evacuated as part of a humanitarian mission coordinated by the United Nations and the Red Cross (ICRC).

Musk has 92 million followers on Twitter, a company he is in the process of attempting to buy in a $44 billion (€41 billion) takeover bid.

Users in Ukraine have been heavily reliant on Twitter to get information and help.

In mid-March, Musk challenged Russian President Vladimir Putin to a "man-to-man fight" over his country's invasion of Ukraine.

Bloody good policy? The countries that have tried menstrual leave