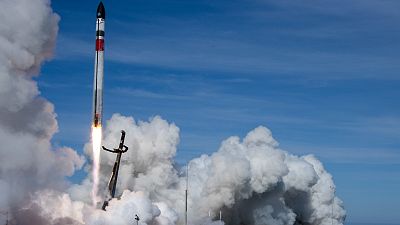 Small launch firm Rocket Lab USA Inc on Monday captured a falling rocket stage out of the air with a helicopter before dropping it in the ocean, appearing to achieve a partially successful test of the company's novel cost-savings approach to recovering used rockets for multiple mission to space.

The demonstration, involving parachutes and a long cable hanging from a helicopter, sought to check off a key milestone for the Long Beach, California-based company as it ventures to slash the cost of sending things into space, an industry trend pioneered by billionaire entrepreneur Elon Musk's SpaceX.

After lifting off to send 34 satellites toward orbit at 10.50 am (11.50 pm CET) in New Zealand, the Long Beach, California-based company's four-story-tall Electron booster stage fell back through Earth's atmosphere and deployed a series of parachutes to brake its speed.

At high altitudes above the South Pacific, just off the New Zealand coast, a helicopter hanging a long, vertical cable from its underside was steered by two pilots over the booster, which had stretched to its side a capture line as it descended under a parachute at roughly 35 km per hour.

The helicopter cable latched onto the booster's capture line, as seen on the company's live stream, prompting cheers and applause from Rocket Lab engineers in the company's mission control centre in Long Beach.

So close: Rocket Lab drops rocket in the ocean

But the cheers from engineers turned to audible groans as the helicopter pilots were forced to release the rocket from the cable and dunk it into the Pacific Ocean after noticing "different load characteristics" than what had been experienced during previous capture tests, a Rocket Lab spokesperson later confirmed.

A fully successful test would have involved carrying the rocket booster back to land or onto a barge without having it touch ocean water.

"The rocket splashed down safely and the ship is loading it now".

It was not immediately clear whether Rocket Lab planned to reuse the booster.

Rocket Lab, which went public in 2021 through a blank-check merger led by Vector Capital which valued it at $4.1 billion (€3.9 billion), has launched roughly two dozen missions to orbit for a mix of government and commercial customers, three of which ended in mission failures.

Recovering rocket boosters via parachutes and helicopters instead of using its engines to land vertically means the rocket does not need to save extra - and heavy - fuel for a "propulsive" landing like SpaceX's Falcon 9, Beck said last week.

And landing rockets vertically is trickier for smaller, lighter rockets, according to engineers.

What Rocket Lab hoped to achieve

After the first stage booster launches to space and releases its satellite-topped second stage toward orbit, it is designed to fall back to Earth at eight times the speed of sound, re-entering the atmosphere along a narrow path to rendezvous with the helicopter, which is equipped with tracking computers.

The booster stage is designed to deploy a series of parachutes to brake its speed. Rocket Lab said last week that if all went well, pilots would steer the helicopter, dangling a long cable underneath, toward the parachuting booster, hook onto it and carry it back to land.

A video of a previous test showed a dummy rocket stage drifting down beneath a parachute, with a smaller, secondary chute stretching the capture line to the side of the rocket, making it easier for the helicopter's vertically hanging hook line to catch on. In the demo, the helicopter remains well above the rocket.

Finland is selling its €75 million Bitcoin stash to support Ukraine

‘Drives better by itself’: Autonomous trucks hit the road in Sweden