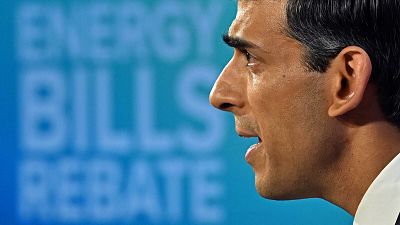 The announcements on crypto would make sure the UK's finance industry was "always at the forefront of technology and innovation," Chancellor Rishi Sunak said.   -   Copyright  Justin Tallis/AFP
By Tom Bateman  •  Updated: 05/04/2022

The UK government plans to issue its own non-fungible token (NFT) as an "emblem of the forward-looking approach" the country is taking toward crypto assets, Britain's minister responsible for financial services, John Glen, has revealed.

The NFT will be issued by the Royal Mint, the institution responsible for minting the UK's hard currency, at the request of the UK finance minister, Rishi Sunak.

In a speech at the Innovative Finance summit in London on Monday, Glen also confirmed the British government's intention to regulate the crypto industry, saying that it had heard some of the "valid" concerns about the risks involved.

"If crypto-technologies are going to be a big part of the future, then we – the UK – want to be in, and in on the ground floor," he said.

The government will begin to regulate some stablecoins - cryptocurrencies that are pegged to the value of fiat currency or commodities in order to reduce their volatility - in order to bring them in line with current rules on payment providers, Glen said.

"This will also enable consumers to use stablecoin payment services with confidence," he added.

The UK's plans reflect a more active stance toward crypto-assets taken by a number of governments in recent years.

Crypto advocates say the technology will make payments faster, easier and more transparent, while skeptics worry it could be used for illegal activity like money laundering and has a high carbon footprint because of the heavy computing power needed to process transactions.

In March, the European Parliament backed proposals to make crypto transactions traceable in a similar way to traditional banking, while US President Joe Biden took a step toward regulating crypto when he signed an executive order on digital assets geared toward mitigating the potential risks they pose to consumers and institutions.

"We think the market has changed sufficiently for us to look at regulating a broader set of crypto activities including trading of tokens like Bitcoin," he said.

"We will consult on a world-leading regime for the rest of the crypto-market too. A regime that will facilitate safe and sustainable, and I hope rapid, innovation".

The UK tax implications of investments in decentralised finance (DeFi) instruments and cryptocurrency staking will also be studied, Glen said.

Britain's plan to mint an NFT comes as interest in the space appears to be waning.

Sales on OpenSea, the largest NFT marketplace, reached nearly €4.5 billion in January - a major increase on the €7.2 million a year before - but declined to around €2.2 billion last month.

The UK wouldn't be the first country to mint its own official NFT.

Last year, Slovenia's Ministry of Economic Development and Technology announced that it would mint a collection of NFTs in order to give them away to visitors to the country's pavilion at the 2020 Dubai World Expo.

Elon Musk appointed to Twitter's board and calls for edit button

As the war in Ukraine rages on, Europe braces itself for stagflation