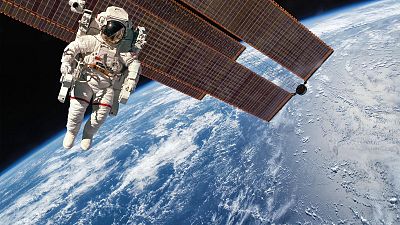 The ISS has been the focus of recent tensions between NASA and Roscosmos over the Ukraine war.   -   Copyright  Canva
By Natalie Huet  with AP and Reuters  •  Updated: 04/04/2022

Russia has once again threatened to end cooperation with Western partners on the International Space Station (ISS) and other joint projects in space if sanctions against Moscow are not lifted.

Dmitry Rogozin, head of Russia's space agency Roscosmos, said on Twitter that the aim of the sanctions is to "kill Russian economy and plunge our people into despair and hunger, to get our country on its knees". He added that "they won't succeed in it, but the intentions are clear".

"That's why I believe that the restoration of normal relations between the partners at the International Space Station (ISS) and other projects is possible only with full and unconditional removal of illegal sanctions," Rogozin said on Saturday.

Rogozin added that Roscosmos' proposals on when to end cooperation over the ISS with the space agencies of the United States, Canada, the European Union, and Japan will soon be reported to Russian authorities.

It's not the first time Rogozin makes threatening comments. He has previously said that the sanctions could "destroy" the US-Russian partnership on the ISS.

Space is one of the last remaining areas of cooperation between Moscow and Western nations.

US-Russian negotiations on the resumption of joint flights to the ISS were underway when the West introduced sweeping sanctions against Russia over its invasion of Ukraine - which Moscow calls a "special military operation" - in February.

The European Space Agency said last month it was suspending cooperation with Roscosmos over the ExoMars rover mission to search for signs of life on the surface of Mars.

Also last month, British company OneWeb announced it was partnering with Elon Musk's SpaceX to send its satellites into orbit after Russia refused to let it use its rockets to launch them.

Despite the tensions, a US astronaut and two Russian cosmonauts safely landed in Kazakhstan on Wednesday after leaving the space station aboard the same capsule.

On Saturday, Rogozin suggested on Russian state TV that the Western sanctions, some of which predate Russia’s military action in Ukraine, could disrupt the operation of Russian spacecraft servicing the ISS.

He stressed that the Western partners need the ISS and “cannot manage without Russia, because no one but us can deliver fuel to the station.”

Rogozin added that “only the engines of our cargo craft are able to correct the ISS’s orbit, keeping it safe from space debris.”

Rogozin had already raised eyebrows in the days after the invasion of Ukraine when he suggested the ISS could crash from the Earth's lower orbit into the US or Europe because of western sanctions on Russia.

"If you block cooperation with us, who will save the International Space Station (ISS) from an uncontrolled deorbit and fall into the United States or Europe?" Rogozin tweeted at the time.

Later on Saturday, Rogozin wrote on his Telegram channel that he received responses from his Western counterparts vowing to promote “further cooperation on the ISS and its operations.”

He reiterated his view that “the restoration of normal relations between partners in the ISS and other joint (space) projects is possible only with the complete and unconditional lifting” of sanctions, which he referred to as illegal.

In a statement to Euronews Next, NASA Administrator Bill Nelson said the American agency was "aware" of Rogozin's latest comments.

"The professional relationship between our international partners, astronauts, and cosmonauts continues for the safety and mission of all onboard the ISS".

Subvariant BA.2: What we know about the most dominant COVID strain

Toyota recalls electric SUVs because their wheels may come off

Lightyear's car runs on sunshine — but is it in your price range?

Will the world soon be powered by space-based solar energy?