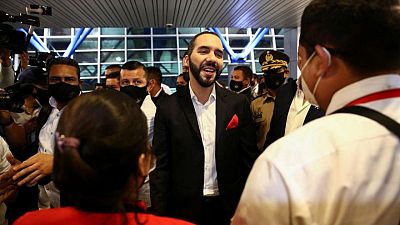 El Salvador's President Nayib Bukele on Wednesday asked US senators to stay out of the country's "internal affairs" after they called for an investigation into the economic risks the United States faces due to the Central American country's adoption of Bitcoin as legal tender.

The proposed Accountability for Cryptocurrency in El Salvador Act (ACES) aims to "mitigate potential risks to the US financial system" such as money laundering and terrorism funding.

If the bill passes, it would give federal agencies in the US 60 days to submit a report that assesses several aspects of the Central American nation’s abilities regarding cybersecurity and financial stability.

In response, Bukele, 40, tweeted, "Ok boomers… You have 0 jurisdiction on a sovereign and independent nation," referring to the older generation of "baby boomers".

"We are not your colony, your back yard or your front yard. Stay out of our internal affairs. Don’t try to control something you can’t control".

El Salvador was the first country in the world to adopt cryptocurrency for official use, in parallel to the US dollar, a decision that has drawn it harsh criticism from the International Monetary Fund (IMF).

Fears Bitcoin will weaken the US dollar

The US senators also expressed fear over the fact that adopting Bitcoin could weaken the US government's sanctions policy and increase the activity of criminal organisations.

"This new policy has the potential to weaken US sanctions policy, empowering malign actors like China and organised criminal organisations. Our bipartisan legislation seeks greater clarity on El Salvador’s policy," said the senators in a statement.

The Salvadoran government, which has acquired some 1,801 Bitcoins since September, has been questioned by economists and the opposition for its refusal to be accountable in the process of buying and managing the funds.

Diplomatic relations between El Salvador and the United States have deteriorated after the White House denounced publicly cases of corruption in Bukele's government and an escalation of measures to accumulate power.

How to beat inflation: Top tips on living with rising living costs

Russia's government and bank to recognise cryptos as currency