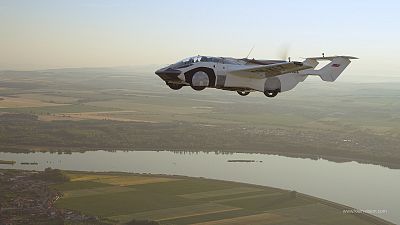 Getting in your car and flying off to your holiday destination could be a reality within years.

A flying car prototype in Slovakia has recently been given an airworthiness certificate, moving one step closer to reaching the public market.

The certificate was delivered by the Slovak Transport Authority, in line with European Aviation Safety Agency (EASA) standards.

The AirCar first made headlines in July 2021 after successfully completing its first manned test flight between two cities in Slovakia. Since then, it has logged more than 70 hours of test flights, 200 take offs and landings, as well as steep 45 degree turns.

Anton Zajac, co-founder of Klein Vision, the company behind the flying car, says he and his partner hope the AirCar will give the pilot the freedom to avoid traffic jams and busy airports.

"I'm flying across Europe often and I wish I had the flying car because I could land and not wait for a taxi, or go through congested terminals," he said.

"Cars used to be a symbol of freedom. And if you have a driver's licence, you certainly know you lost that freedom because you are often stuck in traffic".

AirCar as a common form of transport

“Our goal is to return the freedom back to those who have the pilot's licence and can drive a car and, at the same time, they can take off and cover a distance of 1000 kilometres," Zajac added.

The current prototype has a flying range of 500 km and is equipped with fully retractable wings, a 160HP BMW engine with fixed propeller, and a ballistic parachute.

The company is already working on its next prototype with a flying range of 1,000 km and a cruising speed of 300 km/h.

And while the new prototype will also have to go through airworthiness tests, Zajac says it was important the first prototype was given a clean bill of health since the new car will have the same geometry as the first one.

"If we had not received this certificate, we would have to go back to the drawing board [for the new prototype] and create improvements. Now we know we have something that is accepted officially by the authorities".

People with disabilities can drive this car using just their hands