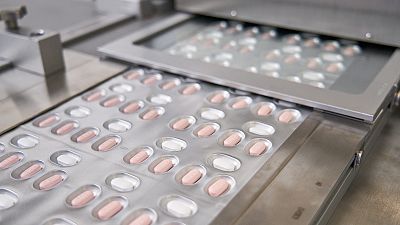 The European Medicines Agency (EMA) said on Thursday it had approved Pfizer's anti-COVID-19 pill Paxlovid, becoming the first orally administered antiviral drug authorised for use in the European Union.

"The EMA's Committee for Medicinal Products for Human Use (CHMP) has recommended the granting of a conditional marketing authorisation for the oral antiviral drug Paxlovid," the EU regulator said in a statement.

The EMA recommended "authorising Paxlovid for the treatment of COVID-19 in adults who do not require supplementary oxygen and who are at increased risk of the disease becoming severe".

Antivirals work by reducing the ability of a virus to replicate itself, thereby curbing the disease.

They are eagerly awaited because they are easy to administer, and can simply be taken at home with a glass of water.

Pfizer said in December that Paxlovid reduced hospital admissions and deaths in at-risk people by up to 90 per cent when taken in the first few days after symptoms appear.

The EMA assessed data from a study involving COVID-19 patients showing that "treatment with Paxlovid significantly reduced hospitalisations or deaths in patients who had at least one underlying condition putting them at risk of severe COVID-19".

The majority of patients in the study were infected with the Delta variant, the EMA said, while noting that laboratory tests indicate that Paxlovid should remain effective against Omicron.

The Pfizer pill is a combination of a new molecule, PF-07321332, and the HIV antiviral Ritonavir, which are taken as separate tablets.

"The EMA's Committee for Medicinal Products for Human Use has concluded that the benefits of the medicine outweigh its risks for the approved use," and will now "send its recommendations to the European Commission for a rapid decision applicable in all EU Member States," the regulator said.

The approval process by the Commission usually takes a few hours or days.

"With the approval of Paxlovid this week, six anti-COVID drugs have been authorised as part of the EU's therapeutic strategy," European Commissioner for Health and Food Safety Stella Kyriakides said in a statement.

The US, Canada, and Israel are among a handful of countries that have already given the new Pfizer treatment the green light.

Your health data can help research. But how will it be protected?