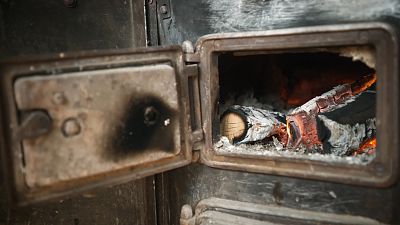 With millions of Europeans having to make the desperately tough choice between eating and heating this winter, Real Economy travels to Bulgaria to see how EU funding is helping support families with a hot meal so they can direct their savings towards their other vital needs.

The eat or heat dilemma

More than 35 million Europeans are unable to afford to keep their homes warm this winter. That’s the equivalent of the entire populations of Greece, Portugal, Hungary and Ireland combined having to decide between heating and putting food on the table.

The two root causes of fuel or energy poverty are low incomes and living in buildings with low energy efficiency.

Soaring fuel prices in Europe in recent months and the ongoing pandemic have exacerbated the problem, making it even harder for people to pay their bills.

The right to access essential services like energy is enshrined in The European Pillar of Social Rights - a guide towards stronger social rights in Europe.

The EU has outlined measures it suggests countries should put in place to keep fuel prices low, including emergency income support and tax reductions.

In France, the number of people using food banks such as Banques Alimentaires, partly funded by FEAD, the Fund for European Aid to the Most Deprived, has jumped by more than 30% since the start of the pandemic.

It's a similar picture across Europe as people struggle to pay for food and rising energy bills.

In Bulgaria, more than a quarter of the population can’t afford to heat their home - that’s the highest level in Europe, followed by Lithuania and Cyprus.

During the winter, temperatures regularly drop below zero in Bulgaria. Finding the money to heat one’s home, especially for the most vulnerable, who often cannot afford to stay warm, can be a huge source of concern.

Kocherinovo is a small mountain village in the west of the country. Nikola, 71, lives there alone. He receives a small pension of around €150 a month - about half the minimum salary. Nikola receives an energy allowance, paid by the government, and with this money he is able to buy wood for his stove.

Soaring energy prices have had a very significant impact on Nikola's budget. Even if he receives medical aid, and a COVID bonus for retired people, he struggles to pay his bills, medication and food.

Thanks to a programme called “a warm lunch for the soul”, Nikola gets a hot meal every day, meaning he doesn't have to make the impossible choice between choosing to eat or keep warm in his home. The initiative is financed by FEAD, the Fund for European Aid to the Most Deprived.

In 2020 more than 15 million Europeans like Nikola benefited from food aid thanks to the European FEAD fund.

Sixty two year-old Evelina lives in the same village and also receives a hot meal every day from “a warm lunch for the soul.”

Despite a disability she takes care of her parents on her own. Their pensions are not enough to cover the family's expenses, so she receives several state benefits, which allow her to make ends meet.

"I get help for food and heating and there’s also an assistant who comes in to help me. It's much better, at least I don't have to cook now. "

Evelina has been able to save some money by buying a more energy efficient stove. It burns pellets instead of wood.

The price of energy is a significant proportion of the cost of living in Bulgaria, especially for the poorest households. In 2018, it represented around 16 percent of expenditure, while in Sweden average energy costs were around 4 percent.

Working alongside and complementing national measures to help the most vulnerable and energy-poor is a strategy of FEAD. The warm food and bread provided eases family budgets so that people can direct their savings towards their other vital needs.

"It proved very important for the poor people that the food and basic material assistance provided through the FEAD programme is also accompanied well by national policies and national measures, reducing the burden to personal income for poor people, for keeping their houses warm or buying the medications that the elderly people need, and keeping a balanced and reasonable life."

Going forward, FEAD's work will be continued with the support of the European Social Fund Plus and its budget almost doubled.

Euronews: "How can we be in a situation in Europe where millions of people can't afford to heat their homes?"

Thomas Pellerin-Carlin: "This is the result of past choices we've made, which are choices to build an inefficient system based on the use of fossil fuels.

Because of that, we happen to be in a situation where tens of millions of Europeans cannot properly heat their homes.

And this worsens every time we have a fossil fuel crisis and a shock coming from fossil fuel prices.

Euronews: "Many European countries have been rolling out measures to help. How much of a difference are they making?"

Energy poverty is worst in the south of Europe and so that's a bit counterintuitive. You would imagine that the colder the country, the worse energy poverty is, but it's actually the reverse.

And because energy poverty is not the result of geography or nature, it is a result of political choices.

If Sweden is doing fine now, it's not because of the current Swedish government, but because of 30 years of Swedish investment in renovating houses, in developing renewable heating systems."

Euronews: "In your view, what needs to be done at a European level?"

Thomas Pellerin-Carlin: "For me there are three things: part of the European Green Deal, in our view at the Jacques Delors Institute, should be about making sure that each family can properly heat their home in the winter. That should be a political objective first and foremost.

How do we implement that? First is through regulation. So that means that we mandate the renovation of poorly insulated buildings whenever they are rented or they are sold.

And the third thing is provide funding to support those kind of renovations, especially for the most poor countries like Bulgaria.

And for that, there was a good proposal from the European Commission, which is to create a social climate fund, and that would be a significant step in the right direction."

Energy crisis in Europe: How are countries dealing with soaring bills?

The scandal of child poverty in Europe - are governments doing enough?

Helping in a crisis: the EU's emergency loans to neighbour countries

The right to work: enabling people with disabilities to thrive in the job market