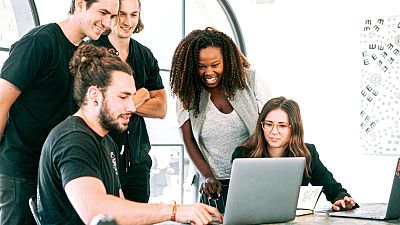 Women and black people in particular are still underrepresented in the tech industry.   -   Copyright  Canva
By Ian Smith  •  Updated: 22/01/2022

A majority of tech recruiters believe there is bias in the hiring process, according to a poll of recruiters from 131 countries.

The research carried out by CoderPad, a candidate assessment platform, saw 14,000 tech workers respond, including almost 4,000 recruiters, half of whom were based in Europe.

Almost 65 per cent of them said bias was an issue in tech recruitment.

The tech industry has long been criticised for its lack of diversity. In 2014, big tech companies acknowledged the gap and made it a public goal to increase diversity in their workforces.

Since then there have been some improvements, although the company is still a long way from approaching parity.

In Meta’s 2021 diversity report, women made up 24.8 per cent of the global tech workforce and the number of black people in US tech roles had increased slightly to 3.1 per cent.

Despite the tech giants' promises to change, problems persist. In December 2020, Timnit Gebru, one of the few black women industry leaders, was fired from Google for refusing to retract a groundbreaking paper around bias in AI systems.

Last year, the US Equal Employment Opportunity Commission found that Activision Blizzard, - which is in the process of being bought by Microsoft - failed to take corrective and preventive measures on sexual harassment complaints.

A lawsuit filed against the games company said there was widespread sexual harassment and workplace discrimination.

Is a lack of diversity contributing to the ‘Great Resignation’?

More than 4 million Americans have decided to quit their jobs every month since the economic recovery from COVID-19 started, a figure that rises to 20 million if measured from May to September 2021.

There are some factors that may explain the causes of a revolution that has caught economists by surprise: from a change of priorities due to the pandemic and labour burnout to savings achieved thanks to policies of economic stimuli.

When it comes to the tech sector, a report from the academic publishing giant Wiley suggests that the tech industry’s long struggles to achieve workplace diversity and equity could also be a contributing factor.

In a survey of 2,030 workers between the ages of 18 and 28 conducted in the US in July 2021, the company found that 50 per cent said they had left or wanted to leave a tech or IT job “because the company culture made them feel unwelcome or uncomfortable”.

A higher percentage of women and Asian, Black, and Hispanic respondents each said they had such an experience. And 68 per cent of respondents said they have felt uncomfortable in a tech role because of “their gender/ethnicity/socio-economic background or neurodevelopmental condition”.

The research also surveyed 270 tech business leaders and 68 per cent of them said there was a lack of diversity in their tech workforce.

What should be done?

Moving to a skills-based assessment in the hiring process was the most favoured way to help reduce bias by recruiters surveyed by CoderPad, with 42 per cent of respondents saying their company has started doing it.

Implementing equal pay and proactively sourcing diverse candidates were the other most popular solutions chosen by recruiters.

The Wiley researchers also suggested that there should be a bigger focus on bridging the gap between college and the first step on the career ladder.

“The majority of businesses surveyed said they have trouble recruiting diverse tech talent at the entry level,” they wrote.

“In order to achieve greater diversity at a junior level, businesses must actively work to widen their talent pool, publicising their roles to a wider variety of people and encouraging them to apply”.

They also suggested increased on the job training and companies to hold unconscious bias workshops for employees.

No jab, no job: Google gets tough on employee COVID vaccine policy

Bringing your dog to work is good for business, this company says

Your health data can help research. But how will it be protected?