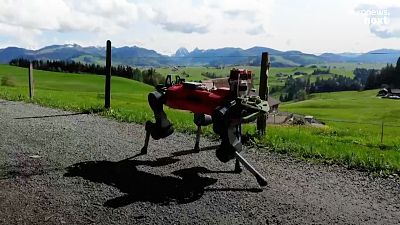 Robot dog ANYmal is able to work out how to walk over any terrain by combining what its sensors can “see” with what it knows about its surroundings.   -   Copyright  Reuters
By Euronews and Reuters  •  Updated: 26/01/2022

This robot dog hiked over a steep mountain in Switzerland - and it didn’t need the help of its humans to overcome the many obstacles of the rough terrain.

The skilled dog bot could be used to reach areas that are too dangerous or inaccessible to humans, including other planets, according to its creators.

The robot dog is able to work out how to walk over any terrain by combining what its sensors can “see” with what it knows about its surroundings, just like people or animals.

“Until now when a robot used perception mostly they were just assuming that the map is always correct,” said Takahiro Miki, a PhD student at the Robotics Systems Lab at ETH Zurich.

“But often when we go outdoors this doesn’t happen, like when you go into the tall grass”.

The team used landscapes with visual obstacles like deep snow and tall grass as an example of when a robot’s camera systems produce a map of the landscape that doesn’t work when the robot puts its foot down.

ANYmal’s control system allows it to prioritise its sense of touch over its visual perception.

The team put the ability to the test on a hiking route up Mount Etzel in the Swiss Alps which stands 1,098 metres above sea level.

“The slope was quite steep, like it was even hard sometimes for us. It was quite exhausting but the robot could go over all of these obstacles and we didn’t need to help the robot,” Miki said.

The scientists hope the new skill could allow ANYmal to be deployed anywhere on Earth and on space missions to other planets.

Hundreds of four-legged robots, many of them made by Hyundai-owned Boston Dynamics, are already in use, some in hostile industrial environments, including one performing survey work in Chernobyl and another working on a BP oil rig in the Gulf of Mexico.

Tech this week: France authorises drones for police use

'If not you, then who?': Besieged Ukrainian asks Elon Musk for help