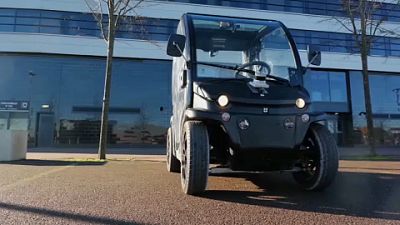 Imperium's prototype driverless taxi that can be driven remotely to meet its next passenger.   -   Copyright  AP
By Euronews  with AFP  •  Updated: 19/01/2022

Lowcost mobility provider Uber may soon be up against another competitor, except this taxi doesn't have a driver — or at least not one seated inside of it.

Imperium Drive is spearheading its prototype driverless taxi that can be driven remotely to meet its next passenger in Milton Keynes, England.

From an app, users will be able to request a vehicle which is then remotely driven to their location.

Unlike regular taxis, the passenger then drives the vehicle to their destination.

"This journey altogether will be as convenient as an Uber, except that you have to do the driving," said Koosha Kaveh, co-founder and CEO of Imperium Drive Ltd, the company which developed the technology.

"So in terms of the time it takes for a car to arrive, the on-demandness of it, all will be very convenient. But you become your own Uber driver and save costs on your Uber trip. When you get to your destination, you just pull over, then, on the app, ask for a remote driver to take over control of that vehicle and off you go to your destination without having to worry about parking, either."

For now, the car is being trialled by the staff of the MK Stadium but it will soon be extended to football players from Milton Keynes Dons FC.

Imperium Drive aims to launch its ride-hailing service later this year under the name Fetch.

The project is part of a wider national initiative from the British government called "5G Testbeds and Trials Programme."

Its goal is to invest in 5G real-life applications — like in Milton Keynes.

"Well, this project is about exploring the new mobility solutions that are just around the corner, particularly interested in connected and autonomous vehicles. And in essence, the project is about testing 5G capability to enhance and develop these services to a situation where we can deploy them in the city," said Brian Matthews, head of transport at Milton Keynes council.

Imperium Drive received about £4.5 million (€5.3 million) to run the trials from local and national government and private investors.

In the next 10, 15 years, we are really expecting to see autonomous vehicles take over.

And thanks to 5G, the company could make a big leap forward.

"5G has much larger bandwidth capabilities and much lower latency that essentially allows a remote driver to be able to drive at higher speeds safely. Currently, with 4G, we're looking to go out to streets of 30 miles an hour, which is the normal urban speed limit," said Kaveh

So we can't go into places like dual carriages — and by that, I mean remotely driving on dual carriages or highways. 5G will just allow us to extend our reach and be able to go to roads with higher speed limits."

When will it be available?

From March, it hopes to launch the service in the city centre along specific routes, with a 5-seater sedan — the next step towards a much bigger goal.

"Our goal as a company is to make remote driving safer than normal driving. And this is really important. And we believe that's possible through technology, through computer vision and through software," said Kaveh.

This journey altogether will be as convenient as an Uber, except that you have to do the driving.

During the trials, a remote driver is working from a booth inside the stadium.

Seated next to wide windows, the remote driver can check on the vehicle when it is in sight on the stadium grounds, but once they hit the roads of Milton Keynes, they will be entirely dependent on the onboard cameras.

The remote driver uses a steering wheel and pedals which were originally designed for video games.

Less than a day of training would be required for remote drivers to be onboarded.

"The operator has a more granular view of what's around. It's because, in normal driving settings, you have blind spots. We don't have that in remote driving, either. And using those live streams, the driver makes driving decisions and exerts the control over the car back to the vehicle all via the wireless communication networks 4G and 5G now," Kaveh said.

But even if 5G represents a big improvement over 4G, remote driving still raises safety questions.

What happens when the car is driven through an area not covered by 4G or 5G? What if the network speed is slower than usual, or worse, completely down?

"Our ultimate safety layer is if you have a loss of network, which means that the remote driver cannot possibly be in control of the vehicle, the vehicle will execute emergency stop manoeuvres to bring the vehicle into stop safely."

Another safety feature is this emergency stop button, added to the console of this car.

A 5-seater Kia Niro sedan car will be used to launch the service in Milton Keynes — a normal hybrid car, readily available on the market.

It'll be ready to be driven remotely by the end of the month, according to Imperium Drive.

In the meantime, the company is retrofitting it with the computer, cameras and software necessary to make the service work.

"In the next 10, 15 years, we are really expecting to see autonomous vehicles take over and there are different companies out there," said technology expert Jonathan Roubini.

"What they're trying to do is get there step by step, so not automatically go to autonomous vehicle all of the sudden, but like these guys are doing, where they're introducing a remote driver and getting the car where it needs to be, but you're still driving it yourself. So it's really — they're doing not baby steps, but they're really doing some steps towards that final goal," he added.

Imperium Drive already has in mind a second development phase, where passengers could refuse to take the wheel and ask to be driven remotely.

With this new business model, they hope to create a new gig economy for remote drivers.

For now, thanks to off-site remote drivers and passengers driving themselves to their locations, Imperium Drive claims that its Fetch service will cost up to 50 per cent less than Uber trips.

The company did not disclose the pricing of its upcoming service nor the exact rollout of its service in the UK later this year.

What can we expect from the 2022 CES tech show?

Driverless 'robotaxis' begin taking fares on the streets of Beijing

Life-giving water discovered on exoplanet could in fact be methane