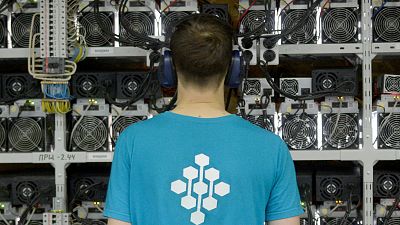 Proof of work mining requires huge amounts of computational power - and a lot of electricity to run it   -   Copyright  OLGA MALTSEVA/AFP
By Tom Bateman  •  Updated: 20/01/2022

The European Union should ban the energy-intensive system used to mine Bitcoin, one of the bloc's leading financial regulators has said.

In an interview with the Financial Times, vice-chair of the European Securities and Markets Authority (ESMA) Erik Thedéen called for a bloc-wide ban on "proof of work" crypto mining, saying the industry's energy usage was becoming a "national issue" in his native Sweden.

"Bitcoin is now a national issue for Sweden because of the amount of renewable energy devoted to mining," Thedéen told the FT.

"It would be an irony if the wind power generated on Sweden’s long coastline would be devoted to Bitcoin mining," he added.

Bitcoin now consumes 0.6 per cent of the world's electricity, according to figures from the Cambridge Bitcoin Electricity Consumption Index.

What is proof of work?

Bitcoin and Ether, the two largest cryptocurrencies, are minted via the proof of work system, which financially incentivises miners to use ever more computing power - and therefore electricity - to validate blockchain transactions and earn the tokens.

Thedéen previously called for a ban on proof of work crypto mining in November last year, in his capacity as director of the Swedish Financial Supervisory Authority.

From April to August 2021, the energy consumption of Bitcoin mining operations in Sweden rose by "several hundred percent," Thedéen said at the time.

In the interview published on Wednesday, the Swedish regulator emphasised that he was not calling for a blanket ban on cryptocurrencies, but rather that he was trying to promote a "discussion about shifting the industry to a more efficient technology".

"The solution is to ban proof of work," he said.

One potential avenue to explore could be a move to "proof of stake" mining, Thedéen told the newspaper.

While proof of work encourages competition between miners to keep the network secure, proof of stake mining is a less energy-intensive process where miners put their tokens up as collateral against errors in the validation process.

Ether, the second largest cryptocurrency by market capitalisation, is due to move to proof of stake mining in the second half of this year.

Rising concerns over the growing energy consumption of the crypto mining industry have already prompted governments to take action. Earlier this month, Kosovo banned crypto currency mining in an effort to tackle the country's worst energy shortage in a decade.

In November, Norwegian authorities told Euronews Next that they would consider backing a ban on proof of work and said the Nordic country was "considering potential policy measures" to address the challenges crypto mining posed.

"Although crypto mining and its underlying technology might represent some possible benefits in the long run, it is difficult to justify the extensive use of renewable energy today," Norway's local government and regional development minister Bjørn Arild Gram told Euronews Next.