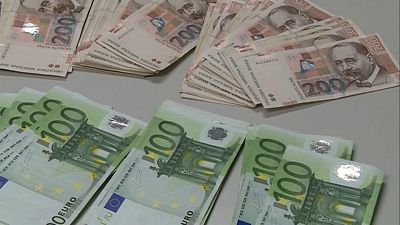 Croatian Prime Minister Andrej Plenković has announced that from September 5, prices will be displayed in both kunas and euros in the country, and through the whole of 2023.

Prices of consumer goods and services in Croatia, as measured by the consumer price index, increased by 5.5% in December 2021 compared with December 2020, while in the whole of 2021 they rose by 2.6% year on year, the state statistics bureau (DZS) said on Monday.

The annual inflation rate in December was the highest since October 2008, when it was 5.9%.

Compared with November 2021, consumer prices on average stayed the same.

The highest year-on-year price increase was observed in transport, of 11.4%, which was largely generated by fuel price increases, of 22.5% on an annual level.

All other categories also recorded annual price increases, except the health sector which registered a decrease of 0.3%.

Food prices, which account for a significant portion of the goods basket, continued their rise that began in July, increasing by an average of 8.1% in December.

Prices of alcoholic drinks and tobacco increased by 5.9%, clothing and footwear by 3.7%, housing by 3.2%, and household furniture by 4%.

Compared with November, the highest increase in prices was registered for food and non-alcoholic beverages (+1.4%). Prices of clothing and footwear decreased by 8.2% and those of housing, water, electricity, gas, and other fuels by 0.2%.

The average annual inflation rate for the entire year was 2.6%.

Governor Vujčić said that the country should be ready to provide the market with the euro banknotes and coins upon the transition to that currency.

Asked about the pros and cons of the admission to the euro area, Vujčić said that Croatia would be provided with better protection in the cases of crisis.

The euro adoption will remove the currency exchange risks, and in this segment, Croatia will have the biggest advantages, since its economy is "more euroized than any other euro area candidate so far," he explained.

"A majority of time savings deposits are tied to the euro," he said adding that "for instance, 10% depreciation of the kuna in terms of its exchange rate versus the euro would increase the debt of all the sectors by HRK 50 billion. This is a huge risk that can cause a recession, and our entry into the euro area will remove that risk," he went on.

He added that there are currently 36 billion kunas in cash in circulation, and in the next 12 months the money should be either deposited with banks or spent.

In 2023, everyone will be able to exchange kunas for euros free of charge in banks, in the Croatian Post offices, and in FINA (Financial services and payment systems) branches.

Croatia counting down to join the Eurozone from 1st January 2023

Terra Luna crash made headlines but stablecoins are here to stay