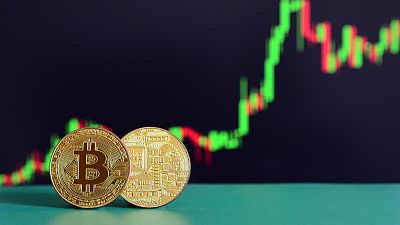 Investors have been dumping risky assets, including crypto, after the Fed announced a potential tightening of monetary policy.   -   Copyright  Canva
By Euronews and AFP  •  Updated: 10/01/2022

Bitcoin briefly fell below $40,000 (€35,299.40) on Monday - the lowest since late September - suffering in the first few sessions of 2022 from a lack of risk appetite from investors worried about the Fed tightening monetary policy.

Since the beginning of the year, Bitcoin has lost nearly 12 per cent of its value.

The leading cryptocurrency had benefited in late 2020 and 2021 from the flood of liquidity that flooded the markets due to the ultra-loose monetary policy of the US Federal Reserve.

The prospect of a tightening of the latter, to counter inflation, is instead weighing on Bitcoin, as it is on the world's stock markets.

"The shares of technology companies, which are particularly sensitive to the prospect of higher rates, are under pressure," said Fiona Cincotta, an analyst at City Index.

Some investors also believe that Bitcoin'slimited supply - due to the algorithm that regulates its issuance - makes it a safe haven against inflation, a kind of digital gold which would therefore be less attractive if the Fed acts.

One thing that could further exascerbate the situtaion is the publication of the US inflation figures on Friday.

"If the published data exceeds market expectations, we can expect even more bitcoin selling as investors calculate that the higher the inflation, the faster the Fed will have to act," summarised Marcus Sotiriou, an analyst at cryptocurrency broker GlobalBlock.

Is the Big Apple about to become the US' latest crypto hub?

Omicron may be 105% more transmissible than Delta, new research says