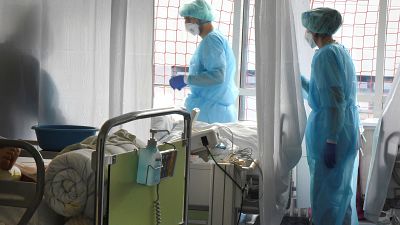 The UK’s medicines agency (MHRA) has approved a treatment for COVID-19 that has been found to cut hospitalisation and death by 79 per cent.

Sotrovimab, with the brand name Xevudy, is the second COVID-19 drug to be approved by the agency.

It is for people with "mild to moderate COVID-19 who are at high risk of developing severe disease," the MHRA said in a statement on Thursday.

It is the second "monoclonal antibody therapeutic" to be approved following Ronapreve, which the MHRA green-lighted in August.

In a clinical trial, a single dose of the drug was found to reduce the risk of hospitalisation and death by 79 per cent in high-risk adults with a COVID-19 infection.

It is administered by intravenous infusion over the course of 30 minutes.

The agency said it was approved for those over the age of 12, who are at increased risk of developing severe illness, due to factors such as obesity, older age, diabetes, or heart disease.

What does this mean for Omicron?

Scientists are racing to understand more about the emerging variant Omicron, which is causing concern across the world after it was first detected by epidemiologists in South Africa.

Sotrovimab was developed by GlaxoSmithKline and Californain lab Vir Biotechnology, and according to the latter’s CEO George Scangos, it was "deliberately designed with a mutating virus in mind".

GSK said its experimental treatment remained active "against key mutations in the new Omicron variant," according to pre-clinical data.

"To date, Sotrovimab has demonstrated that it remains active against all variants of concern and interest as defined by the World Health Organization," the company said.

The MHRA said in its statement however that it is too early to know how Omicron could affect Sotrovimab’s effectiveness.

"I am pleased to say that we now have another safe and effective COVID-19 treatment, Xevudy (Sotrovimab), for those at risk of developing severe illness," Dr June Raine, the MHRA's Chief Executive, said.

"This is yet another therapeutic that has been shown to be effective at protecting those most vulnerable to COVID-19, and signals another significant step forward in our fight against this devastating disease.

"With no compromises on quality, safety, and effectiveness, the public can trust that the MHRA have conducted a robust and thorough assessment of all the available data".

The clinical trial data shows the drug is most effective when taken in the early stages of infection.

MHRA insisted the new drug was not a substitute for vaccination against COVID-19, and said the government and the UK’s NHS would confirm how the drug would be deployed "in due course".

Inside Decentraland, a metaverse world where 'land' sells for millions

Could a nasal spray be the solution to preventing and treating COVID?