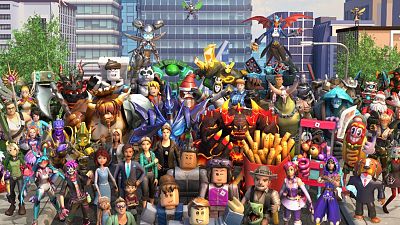 After Facebook caused a frenzy by changing its parent name to Meta in a bid to pursue opportunities in the “metaverse”, scores of companies are announcing their own virtual reality (VR) plans.

The metaverse is a term coined in the 1992 science fiction novel “Snow Crash” to combine the prefix “meta” (meaning showing or suggesting an explicit awareness of itself) and the word “universe” to describe a virtual universe that is accessed by VR tech.

The virtual world could change the way we work, do business, network and shop, all of which gives brands a massive opportunity.

Euronews Next takes a look at some of the companies that are building what could be the future of tech.

The Chinese social media and gaming giant Tencent is reportedly entering the metaverse and experts say the virtual world could shape up to be a battle between Meta and Tencent.

The South China Morning Post reported this year that the Chinese company registered many metaverse-related trademarks for its social site QQ. But the company has not officially announced any plans to embark into the metaverse.

Tencent has strategic partnerships such as with Epic Games and Roblox’s gaming platform. Additionally, Tencent’s empire spans virtual offices and mobile payments, so it would have a massive audience across multiple industries.

But China’s current crackdown on the Internet industry could mean the metaverse has an uncertain future. Tencent has said though that it believes Beijing is “not fundamentally averse to the development of (the) metaverse,” as long as the user experience is “provided under the regulatory framework”.

Video game platform Roblox Corporation only went public this year but in November, it announced plans for a metaverse that is built around its players.

The company says it wants to create a virtual space where people can “come together within millions of 3D experiences to learn, work, play, create and socialise.”

Brands are also jumping at the chance to enter the metaverse and see massive advertising potential. Sportswear giant Nike is teaming up with Roblox to create a virtual world called Nikeland.

It will allow users to dress up their avatars in Nike clothing and sneakers and will include Nike arenas, fields and buildings that will allow the player to compete in games such as tag. For now, it will be free to use.

Clothing is not the only commodity that can find its place in the metaverse. The home appliance maker Dyson, known for its vacuums, has built the Dyson Demo VR.

It allows you to use simulation and visualisation technology so you can test its hairdryers, stylers and hair straighteners at home.

It is not just the Big Tech companies that are building their own metaverse.

The Icelandic start-up VR software company Aldin Dynamics is building a virtual world based on the game Waltz of the Wizards. Aldin wants to provide a place where your imagination can come to life.

Epic Games has long been in the metaverse. The company behind the video game Fortnite has become more than just a shooting game.

It allows gamers to participate in dance parties and virtual concerts, such as one it held for pop star Ariana Grande.

But the metaverse will not just be a gaming haven. The company Sensorium, owned by Russian billionaire Mikhail Prokhorov, is building Motion World. It can be explained as a high-graphic, underwater virtual land that has performance spaces.

The company says it will also be a space for users to reinvigorate their minds with meditation and well-being practices.

The company is also creating another virtual world called PRISM, which the company says is for "next-level performances" by electronic music artists.

The Californian chipmaker Nvidia instead calls the metaverse the Omniverse. Its platform is connecting 3D worlds into a shared virtual universe. Omniverse can be used for projects such as creating real-life simulations of buildings and factories. It could be the building blocks of the metaverse.

Changing the way we work in the COVID-19 era, Microsoft has unveiled its metaverse project called Microsoft Mesh.

By using its HoloLens 2 headset, you can enter the virtual working world where you can appear as an avatar in a virtual office.

The company says you can “engage with eye contact, facial expressions, and gestures so your personality shines”.

Internet giant Google has so far kept very quiet about its plans for the metaverse.

In a recent interview with Bloomberg, Google CEO Sundar Pichai was vague when asked about the company’s thoughts on the metaverse.

“It’s always been obvious to me that computing over time will adapt to people rather than people adapting to computers. You won’t always interact with computing in a black rectangle in front of you,” he said.

“So, just like you speak to people, you see, and interact, computers will become more immersive. They’ll be there when you need it to be. So, I have always been excited about the future of immersive computing, ambient computing, AR”.

E-commerce giant Amazon has also been muted on its VR plans but could be a big player in the way we shop in the metaverse.