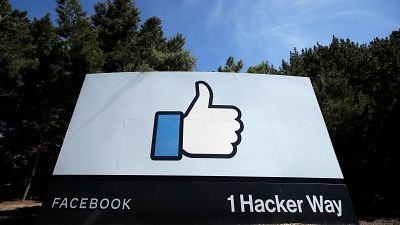 Facebook is feeling the heat over climate misinformation on its platform   -   Copyright  Jeff Chiu/AP
By Luke Hurst  •  Updated: 05/11/2021

As world leaders and climate activists negotiate how to save the planet from catastrophic climate change at COP26 this week, the “staggering scale” of climate misinformation on Facebook has been revealed in a new report.

Stop Funding Heat, a climate campaign group, said 2021 had been the worst year yet for climate misinformation on the social network, with a 76.7 per cent rise in user interactions with posts containing false information about the environment.

It also claims just 3.6 percent of content flagged as climate misinformation is fact-checked.

The group says “nothing has been done” on the issue, which they say was raised over a year ago.

In response, Facebook said the report was based on "made up numbers and a flawed methodology", and many of the posts highlighted in the report were posts Stop Funding Heat and their partners disagreed with politically.

Facebook, now part of parent-company Meta, has been present at the COP26 climate summit in Glasgow, making more pledges to bolster its climate credentials.

‘Only 3.6 percent of misinformation identified fact-checked’

In its latest report, Stop Finding Heat found millions of people are viewing climate information each week, and a mere fraction of that content is being checked by moderators.

The report, titled ‘In Denial: Facebook’s Growing Friendship with Climate Misinformation’, found there were an estimated 818,000 to 1.36 million daily views of climate misinformation on Facebook.

With just 3.6 percent of identified misinformation fact-checked, there are up to 13.6 times more views of such posts than Facebook claims to send to its Climate Science Centre, launched in September 2020, Stop Funding Heat claimed.

Seventy-eight percent of the estimated spend on these adverts came from seven pages that were already flagged to the company in a previous study last year, the new report said.

Facebook rejected the assertions made in the report, with a spokesperson for Meta telling Euronews: "This report uses made up numbers and a flawed methodology to suggest content on Facebook is misinformation when it’s really just posts these groups disagree with politically. In fact, there were over 140 million interactions with climate change content overall during the same time frame - more than 14 times the interactions this report claims".

"We’re focused on reducing actual climate misinformation on our platform, which is why we partner with a global network of fact-checkers and reduce the distribution of anything they rate as false or misleading —and— reject any ads that have been debunked," they said.

'One of the biggest purveyors of misinformation'

But critics, such as the Real Facebook Oversight Board, say Facebook has been “sowing confusion and doubt about climate change in the global conversation.”

The group, an unofficial Facebook watchdog, said in a statement: "We urge media, shareholders and policymakers not to buy what Facebook is selling in Glasgow. They are putting the climate and future generations at grave risk".

Facebook announced in September of this year a $1 million (€850,000) fund for fact-checking organisations and climate experts to counter misinformation on its platform, which did little to impress climate activists.

"For a company that makes $85 billion a year, a $1 million program that outsources the problem they’ve created shows that Facebook is not serious about solving climate disinformation," said Friends of the Earth spokesperson Michael Khoo at the time.

Sean Buchan, chief researcher for Stop Funding Heat, said the data shows Facebook “is among the world’s biggest purveyors of climate misinformation”, and their third-party face-checking programme, and its Climate Science Centre had failed.

"Our report shows the staggering scale of climate misinformation on Facebook, in posts, groups and ads," he said.

"This is where the ambitions of COP26 and the revelations of the Facebook Papers collide, with our data showing Facebook is among the world’s biggest purveyors of climate misinformation".

What the activists want

Stop Funding Heat has called on Facebook to adopt a definition of climate misinformation that follows the science, and to reveal its research on how misinformation is spreading on its platform.

The group also wants Facebook to enforce a ban on climate information on its advertising platform, and produce a plan to reduce the spread of false information on climate change, which would include real-time debunking and de-platforming repeat offenders.

"The flood of disinformation unleashed by Mark Zuckerberg and Facebook is drowning audiences around the world, with more than 1.3 million views of climate misinformation each day," said Rewan Al-Haddad, a campaigns adviser for the NGO SumOfUs.

"Demanding better of Facebook only leads to more greenwashing and lies. We call for the US, UK, and the EU to stop Facebook’s unchecked power, for the sake of our climate and our collective future," he added.

Lush drops a bath bomb as it quits social media