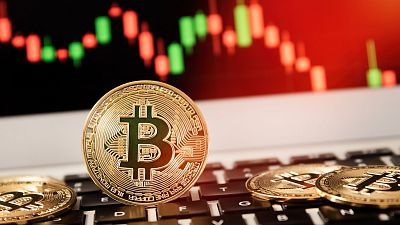 A historic day for the world’s biggest cryptocurrency as the price of Bitcoin soared to a new high of more than $66,000 (€56,669) on Wednesday, after the launch of the first Bitcoin exchange-traded fund.

Bitcoin has been benefiting for the past month from the launch of the first exchange-traded fund (ETF) linked to its price on the New York Stock Exchange, which began trading on Tuesday. Investors are hoping that new funds will be able to enter the cryptocurrency market using this new regulated financial product.

The first trading session appears to have been a success, as the ETF saw 24.4 million trades and finished sharply higher.

Towards a more stable cryptocurrency?

"This shows that there is a strong appetite for bitcoin exposure," commented Fawad Razaqzada, an analyst at ThinkMarkets. He noted that the purchase of this ETF does not represent a direct investment in Bitcoin.

By buying shares in this new ETF, investors will not be betting directly on Bitcoin, he explained. Their money will be invested in future contracts linked to bitcoin.

The indirect aspect of this investment was fundamental to the US market regulator, the SEC, which has regularly warned about the high volatility of Bitcoin.

Regulators have struggled to take a position on the subject of crypto-currencies, whose decentralised network is difficult to control.

However, many of Wall Street's biggest tech and financial names have announced new cryptocurrency-related projects in the past 12 months.

A year ago, on 21 October 2020, online payments giant Paypal kicked off the price spike by launching a cryptocurrency buying, selling and paying service.

Bitcoin is being mined in El Salvador with green volcanic energy

The evolution of money: NFTs could become as ubiquitous as property

Why is the crypto world getting excited about Solana (SOL)?

Turkish lira's decline has impact over the border in Syria

Is the future of football financing in cryptocurrency?