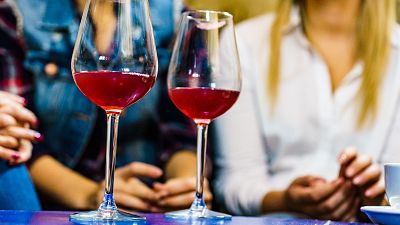 The World Health Organization warns the risk of breast cancer increases with each unit of alcohol per day.   -   Copyright  Getty via Canva
By Pascale Davies  •  Updated: 20/10/2021

There is no safe level of alcohol consumption and the risk of breast cancer increases with each unit of alcohol per day, says the World Health Organization (WHO).

Alcohol consumption is one of the “major modifiable risk factors” for the disease, the WHO said during Breast Cancer Awareness Month.

The health body says breast cancer is the most frequently diagnosed cancer type in the WHO European Region, with 1,579 women diagnosed with breast cancer every day, and estimates that alcohol causes seven of every 100 new breast cancer cases in the European region.

“Many people, including women, are not aware that breast cancer is the most common cancer caused by alcohol among women globally,” said Dr Marilys Corbex, Senior Technical Officer on noncommunicable diseases, WHO/Europe.

“People need to know that by reducing alcohol consumption they can reduce their risk of getting cancer. It doesn’t matter what type, quality or price alcohol is.”

Europe has the highest rate

The WHO European Region, which comprises 53 counties, has the highest rate of new breast cancer diagnoses compared to any of its other regions.

The International Agency for Research on Cancer (IARC) said in 2020 that alcohol consumption was responsible for almost 40,000 new breast cancer cases in Europe.

The same data shows that breast cancer has become the most common cancer globally. More than two million new cases were estimated in 2020, with about 100,000 of these attributable to alcohol consumption.

No safe level of consumption

The WHO says that more than 10 per cent of alcohol-attributable cancer cases in the European region arise from drinking just one bottle of beer (500 ml) or two small glasses of wine (100 ml each) every day.

For breast cancer, this is even higher, with 1 in 4 alcohol-attributable breast cancer cases in the region being caused by this amount.

How does alcohol harm the body?

The IARC classifies alcohol as a Group 1 human carcinogen and it is linked to seven types of cancer.

“Simply put, alcohol is toxic. It harms every organ while it passes through the body,” said Dr Carina Ferreira Borges, Acting Director for Noncommunicable Diseases and Programme Manager for Alcohol and Illicit Drugs at WHO/Europe.

She recommended limiting the amount of alcohol and replacing alcohol with other beverages. She also urged nationwide policies that help to reduce alcohol consumption.