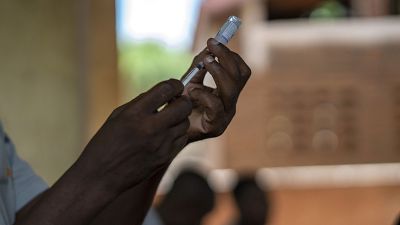 The World Health Organization (WHO) has recommended that the world's first malaria vaccine should be given to children across Africa.

WHO director-general Tedros Adhanom Ghebreyesus said the move was "a historic moment".

Health officials hope the recommendation will spur stalled efforts to curb the spread of the parasitic disease.

The WHO said its decision was based on results from ongoing research in Ghana, Kenya, and Malawi that has tracked more than 800,000 children since 2019.

The UN agency says the pilot project should be expanded beyond the three African countries and that the vaccine can be used alongside existing prevention measures.

"Today's recommendation offers a glimmer of hope for the continent which shoulders the heaviest burden of the disease," said Dr. Matshidiso Moeti, the WHO's Africa director, after a meeting of the health agency's vaccine advisory group.

"We expect many more African children to be protected from malaria and grow into healthy adults."

Mosquirix -- the first malaria vaccine to be authorised -- was developed by GlaxoSmithKline in 1987.

It is estimated to be only about 30% effective and requires up to four doses, while protection fades after just months.

But given the spread of malaria in Africa -- where the majority of the world's more than 200 million cases a year and 400,000 deaths occur -- scientists say the vaccine could still have a major impact.

It is also the first vaccine to be developed against a parasite in humans.

"This is a huge step forward,'' said Julian Rayner, director of the Cambridge Institute for Medical Research

"It's an imperfect vaccine, but it will still stop hundreds of thousands of children from dying," he added.

"The last two years have given us a very nuanced understanding of how important vaccines are in saving lives and reducing hospitalisations, even if they don't directly reduce transmission."

Watch the full interview with Euronews anchor Tokunbo Salako and Dr Mary Hamel in the player above.

Inmates sue after receiving Ivermectin to treat COVID without consent