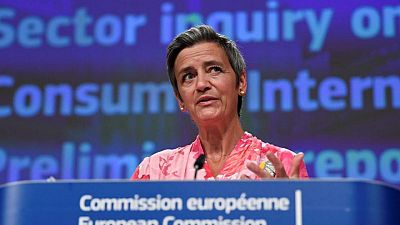 The outage prevented the company's 3.5 billion users from accessing its social media and messaging services including WhatsApp, Instagram and Messenger, as well as Facebook itself, in what internet outage tracker DownDetector said was the "largest outage we’ve ever seen".

Facebook employees were also locked out of their offices by the outage, which was triggered by a configuration error in the company's network that caused it to effectively cut itself off from the rest of the internet.

The incident showed the need for more competition, Vestager said on Twitter.

"We need alternatives and choices in the tech market, and must not rely on a few big players, whoever they are, that's the aim of (the) DMA," she tweeted.

The DMA Vestager referenced is the Digital Markets Act, a new piece of EU legislation that she proposed last year.

If adopted, the DMA would target the largest tech companies, which it refers to as "gatekeepers", and force them to open up their own services like app stores to smaller third parties.

It would also allow users to finalise purchases outside a gatekeeper's platform, potentially cutting them out of the transaction.

The European Parliament and EU member states are now debating their own proposals and will need to reconcile the three drafts before the tech rules come into force.

Why has Facebook been slapped with a fine by a UK regulator?