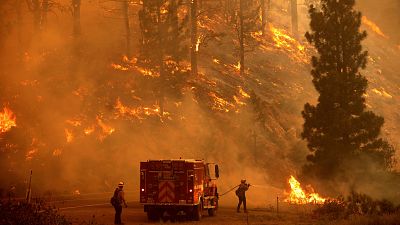 Google Maps has launched an ominous new feature that will tell you how to escape deadly forest fires.

In a blog published on Wednesday, Google Earth & Earth Engine director Rebecca Moore said the feature would give users an easy way to stay updated about multiple wildfires at once.

The wildfire layer is a response to the fact that climate change has made forest fires increasingly common, Google said.

According to the European Environment Agency, 2018 saw forest fires occur in more European countries than ever before.

'Just tap on a fire'

The wildfire layer would be rolled out worldwide starting this week, Google said, in an effort to help people make "quick, informed decisions during times of emergency".

"Just tap on a fire to see available links to resources from local governments, such as emergency websites, phone numbers for help and information, and evacuation details," Moore wrote.

Users in the United States, where forest fires burned almost 10,000 homes in 2020 alone, will have access to rapid updates on the size and spread of each fire, as well as information on when a fire's status was last updated.

Google said it hoped to roll out more detailed information to other countries "in the coming months," starting with Australia where bushfires burned 186,000 square kilometres of land last year - an area almost twice the size of Portugal.

In Tuesday's blog, Moore also revealed that Google would expand its Tree Canopy Insights tool to 100 cities worldwide, up from the current 15 in the US.

"With Tree Canopy data, local governments have free access to insights about where to plant trees to increase shade, reduce heat and mitigate these adverse effects," Moore wrote.

In July, as parts of the American northwest and Canada experienced a historic heatwave, urban forestry expert René van der Velde told Euronews Next that trees were an essential tool for lowering the temperature in cities.

"We have to do a kind of paradigm shift in thinking about cities, keeping our trees and green spaces alive and kicking," he said.

Moore also announced a new Address Maker tool which she said would streamline the process of adding locations and roads to the map in rural areas and developing countries.

Eco-tourism in Georgia, a boost for the economy and for the environment

Facebook's move to fight climate disinformation 'too little, too late'