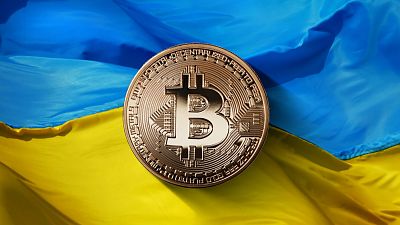 Ukraine has just become the latest country to legalise the use of Botcoin and other cryptocurrencies.   -   Copyright  Getty via Canva
By Pascale Davies  •  Updated: 09/09/2021

Ukraine’s parliament has adopted a new law that legalises and regulates cryptocurrency and other virtual assets like tokens.

The bill was passed in a near-unanimous vote on Wednesday and will now need to be signed by President Volodymyr Zelensky.

Ukraine is the fifth country in as many weeks to set up ground rules for digital currencies following El Salvador’s move to adopt Bitcoin as legal tender.

What does the bill change?

But Ukraine has not gone as far as El Salvador, which accepts Bitcoin as an official form of payment alongside US dollars.

According to the Ukrainian draft bill, the law will regulate “legal relations arising in connection with the turnover of virtual assets in Ukraine, defines the rights and obligations of participants in the virtual assets market, the principles of state policy in the field of virtual assets”.

Put simply, the law will protect the owners of virtual assets and exchange platforms from fraud.

Cryptocurrencies in Ukraine have long been in a grey area, being neither legal nor forbidden due to a lack of existing laws that defined them and their usage.

While buying and exchanging cryptos was allowed, local courts could not protect people in cases of fraud or if something went wrong.

According to the Kyiv Post newspaper, authorities have typically regarded digital cash and cryptos as a “scam” and have raided crypto-related businesses and even confiscated equipment “without any grounds”.

The draft law may also determine how Ukraine will regulate cryptos in the future. The country plans to open up the cryptocurrency market to businesses and investors by 2022, a spokesperson from the Ministry of Digital Transformation told the Kyiv Post.

Ukraine’s Minister of Digital Transformation Mykhailo Fedorov also recently said the country was modernising its payment market so that its National Bank could issue digital currency.

There is a growing number of governments trying to regulate cryptocurrencies. Besides Ukraine and El Salvador, Cuba and Germany have also made strides.

Panama could be the next country to regulate cryptos as it is currently considering a draft law.

Could the Klapcoin cryptocurrency help save French cinema?

Turkish lira's decline has impact over the border in Syria

Is the future of football financing in cryptocurrency?

Bitcoin's price has slumped after a new COVID variant was found. Why?