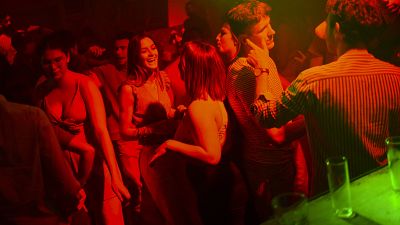 Nightclubs in many European countries have reopened, but could face new restrictions to curb COVID-19 infections   -   Copyright  SEBASTIEN SALOM-GOMIS/AFP
By Tom Bateman  •  Updated: 06/09/2021

If you haven't got your jabs, you're not coming in. That will soon be the reality for nightclub-goers in England, a government minister has confirmed.

The UK's Vaccines Minister Nadhim Zahawi told British media on Sunday that visitors to nightclubs and other similarly-crowded indoor venues would have to prove their COVID-19 vaccination status with official vaccine passports from the end of September.

Zahawi told Sky News that the UK government was working with the nightlife industry to ensure venues could open "safely and sustainably".

"We are looking at, by the end of September when everyone has had the opportunity to be fully vaccinated, for the large venues, venues that could end up causing a real spike in infections, where we need to use the certification process,” he said.

The new rule will only apply in England, with devolved governments in Scotland, Wales and Northern Ireland responsible for making their own judgements on whether or not to introduce the passports.

No return to 'open-shut' uncertainty

The plans to require vaccine passports in England were originally announced by prime minister Boris Johnson earlier this year.

"I don't want to have to close nightclubs again as they have elsewhere. But it does mean nightclubs need to do the socially responsible thing,” Johnson told a press conference in July.

"As we said last week, we do reserve the right to mandate certification at any point if it's necessary to reduce transmission"

Speaking on Sunday, Zahawi said vaccine passports were the best way to ensure that the UK's entertainment industry, which has been hard-hit by the COVID-19 pandemic, could reopen.

"The worst thing we can do for those venues is to have a sort of open-shut, open-shut strategy because we see infection rates rise," he said.

In Scotland, lawmakers are set to debate whether to introduce similar rules for nightclubs and other indoor venues this month. Ministers in Wales and Northern Ireland have yet to announce whether or not their nations will follow suit.

As the UK introduces vaccine passports, authorities in Denmark have decided that they will no longer be needed to access the country's restaurants and nightclubs.

Last week, the Danish government announced that thanks to the country's high rates of vaccination, nightclub-goers would no longer need to prove their vaccination status from September 10.

On September 1, the government said 86 per cent of Danes over 12 years old had received at least one COVID-19 jab.

"I think there's been a great uptake on immunisation so the Danish population has accepted immunisation to a very large extent,” Flemming Konradsen, a public health expert at the University of Copenhagen, told Euronews Next.

“We've had a very significant testing programme and we've also had early lockdowns and periodic lockdowns that in combination have kept the pandemic under somewhat control".

In France, similar moves to mandate vaccine passports - known as the "Passe Sanitaire" - in July resulted in widespread protests against the measures.

In early August, the remit of the Passe Sanitaire was extended to France's bars and restaurants, leading to condemnation from businesses and unions.

Speaking in August, French government spokesperson Gabriel Attal conceded that the extension of the Passe was an "additional constraint" but said it was necessary because of the deteriorating pandemic situation.