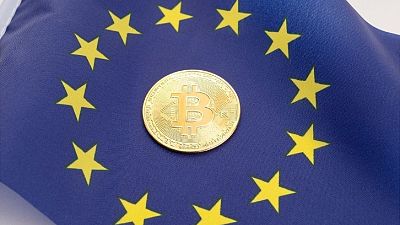 Europeans overwhelmingly want their nationals governments, not Brussels, to regulate digital currencies   -   Copyright  Canva
The opinions expressed in this article are those of the author and do not represent in any way the editorial position of Euronews.
By Louisa Idel  •  Updated: 01/09/2021

From Bitcoin becoming legal tender in El Salvador to crypto-friendly legislation in the US state of Wyoming, cryptocurrencies are making their way into the political and economic mainstream.

As the global cryptocurrency market - currently already valued at more than $2.5 trillion (€2.11 trillion) continues to grow, diverse institutional actors are waking up to the reality that digital currencies are no longer an obscure technology of the future, but a transformative technology of the present.

In light of this, the contest over how to best regulate crypto assets has begun- and the EU wants to get in on the action.

As part of its digital finance strategy, the European Commission first proposed its regulation on 'Markets in Crypto-assets' in September 2020. This legislative proposal, currently undergoing its first reading in the Council of the European Union, ostensibly seeks to create a fully harmonised European market for crypto assets by establishing a legal taxonomy of crypto assets and defining rules for issuers and service providers.

Significant proportions of respondents think the EU’s main goal in seeking to regulate cryptocurrencies is to assert more economic and financial control over member states.

At its heart is the regulation of cryptocurrency exchanges and stablecoins, the latter of which are cryptocurrencies whose value is pegged to that of another asset, such as fiat money or gold.

But what do EU citizens think about these policy efforts? In the largest European poll conducted on the topic of cryptocurrency regulation to date, our team at Redfield & Wilton Strategies surveyed the opinion of more than 30,000 Europeans on the matter.

The general importance of the debate is clear. An average of 11 per cent of Europeans say they have used cryptocurrency to pay for goods or services, with proportions ranging from 7 percent in the Netherlands to 15 percent in Poland.

These rates are likely to grow further across the EU over the coming months. With ‘not knowing enough about cryptocurrencies’ currently being Europeans’ main reason for not owning them. Uptake is likely to increase as understanding of cryptocurrencies improves. This prospect makes the question of who should regulate them, and how, all the more contentious.

In essence, regulators around the world face two options: To tightly control and centralise the future direction of crypto assets, for example through the creation of a central bank digital currency (CBDC), or to adopt an open legal and regulatory framework that allows stablecoins, especially those pegged to multiple currencies to operate smoothly.

If the EU chooses the former approach of creating a CBDC, it is unlikely to win.

Regarding who should have control over the regulation of cryptocurrencies in particular, the trend is the same: support for national governments, rather than the EU regulating cryptocurrencies, is high all across the EU.

Estonia (46 per cent), Italy (47 per cent) and Greece (51 per cent) are among the member states with the highest support for regulating cryptocurrencies at the domestic level. This preference for national regulation suggests that some may view the regulation of cryptocurrencies at the member state level an opportunity to break free from a Brussels they sometimes perceive as overly assertive and cumbersome.

Overall, there is only limited interest among Europeans for Brussels to have control over the regulation of cryptocurrencies. Neither do we find appetite for the creation of a centralised digital euro.

EU citizens are not the only ones opposed to the idea of a CBDC. In a recent poll we conducted earlier this month in Great Britain, we found that only 26 per cent of Britons would support the introduction of a CBDC in the United Kingdom.

For Britons, key concerns surround privacy and the ability of the government to seize users’ money. For many Europeans, the main concern may be a power grab by the EU. In fact, significant proportions of respondents think the EU’s main goal in seeking to regulate cryptocurrencies is to assert more economic and financial control over member states.

Member state governments- and their citizens - are likely aware of the significant economic opportunities of creating crypto-friendly regulatory frameworks that offer the necessary legal protections to users without stifling innovation.

Setting up such a framework will attract cryptocurrency investors and firms that bring jobs, investments, and talent with them. These economic benefits are all the more important in light of the economic consequences of the coronavirus pandemic.

As such, Brussels would be wise to follow the path of creating a favourable legal and regulatory framework that allows stablecoins, especially those pegged to multiple currencies at once, to operate smoothly.

If the EU does not move first on this issue, others will.

Central bank digital currencies: a hammer in search of a nail?

Terra Luna crash made headlines but stablecoins are here to stay

Why the 'Frankenscience' of animal-to-human transplants must stop

Crypto is having a moment, just not the moment some expected

What does 2022 have in store for the global labour market?