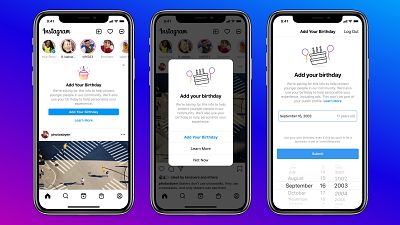 Instagram is demanding to know how old its users are so it can implement new features aimed at boosting privacy for children   -   Copyright  Instagram
By Tom Bateman  •  Updated: 01/09/2021

Instagram users must tell the app when they were born or face being blocked from using it, the Facebook-owned company has announced, as it rushes to put in place child protection measures demanded by new rules that come into force in the United Kingdom on Thursday, September 2.

In a blog post published on Monday, Instagram said it would start to ask all users who hadn't already filled in their birthday to do so every time they opened the app.

"We’ll show you a notification a handful of times and if you haven’t provided us with your birthday by a certain point, you’ll need to share it to continue using Instagram," the post said.

The company said it needed to gather users' birthdays in order to verify their ages and implement new features that improve privacy and security for children using Instagram.

Britain's new "Children's Code" rules - officially known as the Age Appropriate Design Code (AADC) - apply to companies based outside the UK and come with hefty fines for services judged to have failed to protect underage users.

Filmmaker and member of the UK Parliament's House of Lords Baroness Beeban Kidron, who initially introduced the legislation, told Euronews Next that the AADC was having an impact even before coming into effect.

"Instagram’s announcement fits the pattern of tech companies enacting changes to protect children’s privacy and safety before the AADC comes into force, which should encourage lawmakers," she said.

"Of course, companies don’t announce that they are responding to legislation because they don’t want to admit that regulation works. Tech companies did not all simultaneously develop a conscience!"

In March, Instagram announced that adult users worldwide would no longer be able to direct message under-18s who did not already follow them. Last month the company said that accounts for children under 16 years old would now default to a higher privacy setting.

Instagram also said last month that it would reduce the amount of information about under-18s it passed on to advertisers. In its July 27 announcement, the company said advertisers would only be able to customise ads based on a young person's age, gender and location, "starting in a few weeks".

"This means that previously available targeting options, like those based on interests or on their activity on other apps and websites, will no longer be available to advertisers," the company said.

Anticipating that some younger users might try to sidestep the new features, Instagram said on Tuesday that it would use artificial intelligence to determine whether or not a user was lying about their age by cross-referencing their birthday with messages, comments and data from connected apps.

"We look at things like people wishing you a happy birthday and the age written in those messages, for example, 'Happy 21st Bday!' or 'Happy Quinceañera'," said a Facebook blog post announcing the technology last month.

The company will also use AI to stop younger users receiving messages from what it called "adults that have shown potentially suspicious behaviour," which Facebook said meant accounts belonging to adults which had been recently blocked or reported by a child.

While none of Instagram's announcements in recent months have mentioned it, they all serve to bring the platform in line with a new code of practice coming into force in the United Kingdom on September 2.

Our Children’s Code is a key step in ensuring that children can play and explore online with confidence. And that parents can trust that digital services have children’s best interest at heart.
For more information on the impact of our code see our guide https://t.co/SX9lxELuQdpic.twitter.com/6VBqX3C856

Under the AADC, companies will no longer be able to use the claim that their platforms were not designed or intended for children as an excuse.

The rules apply to services which have British users, even if they are based outside the UK. If found to have breached the code by the UK's Information Commissioner's Office, companies could face a fine of over €20 million or four per cent of their annual turnover.

Kidron told Euronews Next she hoped further regulation of tech companies would follow the AADC.

"These changes are just the start. All services likely to be accessed by children are within the scope of the code, and over time we will see new norms of design. It is gratifying to hear that product teams in major platforms are finally considering the ‘best interests of children’, as the code sets out, as they build new products and services," she said.

Facebook's move to fight climate disinformation 'too little, too late'