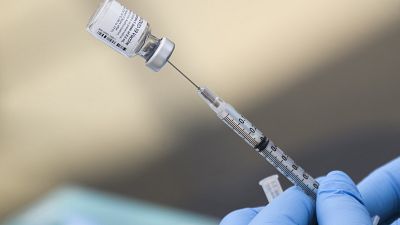 In this file photo a syringe is filled with a first dose of the Pfizer Covid-19 vaccine at a mobile vaccination clinic at the Weingart East Los Angeles YMCA in Los Angeles   -   Copyright  PATRICK T. FALLON/AFP
By Pascale Davies  •  Updated: 19/08/2021

The Pfizer and AstraZeneca coronavirus vaccines are less effective against the Delta variant three months after inoculation, a major new UK study has found.

After 90 days of two doses of the vaccines, the efficacy of Pfizer-BioNTech slipped to 75 per cent from 93 per cent two weeks after being jabbed.

Oxford/AstraZeneca’s efficiency dropped to 61 per cent after three months from 71 per cent two weeks after the second dose.

The drop in effectiveness was also more visible for those aged 35 years and above.

But the study highlighted both vaccines still staved off the majority of COVID variants.

"Both of these vaccines, at two doses, are still doing really well against Delta... When you start very, very high, you’ve got a long way to go," said Sarah Walker, an Oxford professor of medical statistics and chief investigator for the survey.

The study was produced by the University of Oxford and the Office for National Statistics.

It analysed the periods before and after the Delta variant became prevalent.

Both of these vaccines, at two doses, are still doing really well against Delta.

Neither vaccine was found to be as effective against the Alpha variant, which was first identified in the UK in September 2020.

Researchers also said there was insufficient data for Moderna, but said: "A single dose of the Moderna vaccine has similar or greater effectiveness against the Delta variant as single doses of the other vaccines".

The researchers would not project how much more the protection would drop over time.

The findings may prompt calls for booster shots to those who have already received double vaccine doses.

On Wednesday, the United States said those who had both doses of the Pfizer or Moderna vaccine will get a third after eight months.

Israel has also started administering third doses to those aged over 50.

The World Health Organization (WHO) condemned the rush by wealthy nations to give booster shots as millions of people in poor countries have yet to receive a single dose.

Up until now, only about 32 per cent of the world has received one dose.

"We are planning to hand out extra life jackets to people who already have life jackets, while we are leaving other people to drown without a single life jacket," WHO emergencies chief Mike Ryan said on Wednesday.

COVID-19 is a vascular disease not a respiratory one, says study