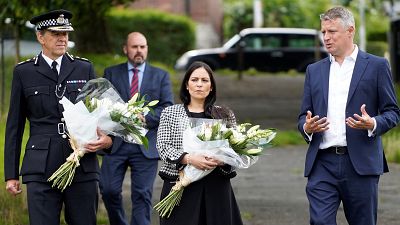 Police in the United Kingdom will now check the social media profiles of applicants for gun licenses after a man killed five people in the southwestern city of Plymouth last week.

The alleged perpetrator of the Plymouth shooting had his gun returned to him in July after his license was suspended for several months following a criminal charge for assault.

Jake Davison posted on his Facebook and YouTube accounts about his sympathy for the misogynist "incel" movement linked to previous violent attacks in the United States and Canada.

The UK government has asked police forces in England and Wales to review their procedures for issuing and returning firearms licences, as well as assessing whether it is necessary to revoke any licences already issued.

"New guidance" will be issued on new applications, including "a review of social networks", the UK's Home Office said in a statement on Monday.

Shaun Sawyer, chief constable for Devon and Cornwall police, told reporters on Friday that investigators were not sure what Davison's motive was.

In a July video posted on his now-deleted YouTube channel, Davison said he was “beaten down and defeated by...life”.

While saying he did not define himself an an incel - short for "involuntary celibate" - Davison complained about his love life and said incels were "people similar to me, they’ve had nothing but themselves, and then they’ve socially had it tough".

On Saturday, Sawyer told The Sun newspaper that officers had not previously monitored the digital presence of people who had their firearms licences returned to them as it would constitute an invasion of their privacy.

Police did not say whether the gun Davison was licenced to use was the one used in the shootings.

The Independent Office for Police Conduct (IOPC), the body that oversees police complaints in England and Wales, said it would carry out a mandatory review of the incident.

"We will examine what police actions were taken and when, the rationale behind police decision-making, and whether relevant law, policy and procedures were followed concerning Mr Davison’s possession of a shotgun," IOPC regional director David Ford said.

"The investigation will also consider whether the force had any information concerning Mr Davison’s mental health and if so, if this information was appropriately considered".

According to local police, Davison killed his mother and four other people, including a 3-year-old girl, before taking his own life on Thursday.

The killings marked the first mass shooting in the UK in over a decade. Such mass shootings are rare in Britain, which has strict gun control laws and regulations.

Lush drops a bath bomb as it quits social media

Looking for love? Tinder will need to see your ID