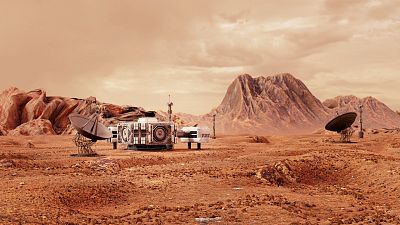 To afford Jeff Bezos’s ten-minute ride to the edge of space, you’d need to find a cool €23 million for a ticket, as one top bidder did.

But for those of us who can only dream of space travel, NASA is offering the chance to spend a whole year on Mars.

The catch? It’s only a simulation.

The US space agency has announced that it is seeking four candidates for a mocked-up mission to Mars starting in Autumn 2022.

Is this life on Mars?

NASA wants to study how highly motivated individuals will adapt to the rigours of life on Mars through a long-term Earth-bound simulation.

The findings could have profound implications for any future attempts at establishing colonies on the Moon and the Red Planet.

NASA’s series of three year-long experiments are intended to help figure out "methods and technologies to prevent and resolve potential problems on future human spaceflight missions to the Moon and Mars," the agency said.

Each of the three simulations will have four crew members, living and working in a 158 square-metre 3D-printed module called the Mars Dune Alpha.

The module will simulate some of the challenges that a real mission to Mars could pose, including "resource limitations, equipment failure, communication delays, and other environmental stressors".

As for the building itself, the layout of the innovative structure is organised in "a gradient of privacy," American construction firm and module designer ICON said.

Contained within the self-sufficient building will be four private crew quarters, workstations, as well as medical and food-growing facilities.

The crew will be able to adapt the living areas to their needs, with movable furniture, customisable lighting, temperature, and sound controls helping them build daily routines and maintain their circadian rhythms.

Crew duties may include simulated spacewalks, scientific research, the use of virtual reality and robotic controls, and exchanging communications.

Not many people. NASA has very specific requirements, with a master's degree in sciences, technology, engineering or mathematics and even pilot experience among them.

Additionally, only US citizens or permanent residents of the United States are eligible.

Lastly, applicants must be between 30 and 55 years old, in good physical shape, free from food allergies or intolerances and not subject to motion sickness.

NASA's ambition is for humans to set foot on Mars in the 2030s. Getting there won’t just involve overcoming the considerable technical obstacles. The crew’s psychological well-being is likely to pose another challenge.

A flight to Mars is long: getting there takes around 6 to 8 months. The distance, isolation, and constant communication delays of up to twenty minutes each way are likely to take their toll.

NASA’s virtual Martians will not be the first to lend themselves to such confinement.

In 2010-2011, Russian, European and Chinese volunteers remained locked up for 520 days to simulate the trip to Mars.

Between 2013 and 2017, NASA volunteers spent up to a full year at a time in an isolated simulation habitat on top of a volcano in Hawaii.

While the first five HI-SEAS (Hawaii Space Exploration Analog and Simulation) exhibitions went smoothly, the sixth ended early when a crew member was electrocuted and had to be taken to hospital.

For more on this story watch the video in the media player above.

Why French students and Thomas Pesquet are getting excited about Blobs