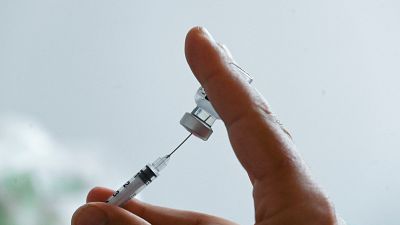 A doctor prepares a dose of the Pfizer/BioNTech Covid-19 vaccine at the prefecture in Lille, northern France   -   Copyright  DENIS CHARLET/AFP
By Pascale Davies  & AFP, Reuters  •  Updated: 02/08/2021

Pfizer and Moderna have increased the price of their anti-COVID-19 vaccines in their latest European Union supply contracts, the Financial Times has reported.

The Pfizer vaccine rises from €15.50 to €19.50. The price of Moderna's vaccines will increase from €19 to €21.50, according to the newspaper which has seen the contract documents.

The rise comes as concern over the Delta variant outbreak mounts and as recent studies have shown that Moderna and Pfizer/BioNTech's vaccines should remain effective against this variant.

Pfizer declined to comment on the contract with the European Commission, citing confidentiality.

"Beyond the redacted contract(s) published by the EC, the content remains confidential and so we won’t be commenting," the company told Reuters.

Moderna was not immediately available for comment to Reuters on Sunday.

Last May, the EU signed a new contract to purchase up to 1.8 billion doses of vaccine from Pfizer/BioNTech for delivery until 2023, without revealing the price.

In early July, European Commission President Ursula von der Leyen announced that the European Union had reached its goal of having enough doses in July to vaccinate 70 per cent of its adult population (336 million people).

Japan suspends use of 1.63m Moderna vaccines over contamination fears

Coming soon: The quick test that can detect cancer cells in urine