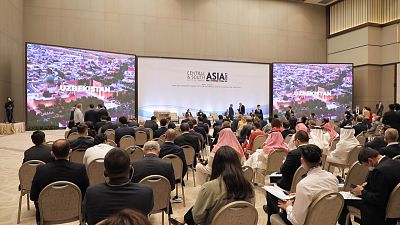 How can regional connectivity between Central and South Asia be developed? This is the question that topped the agenda of a recent international conference in Tashkent, initiated by Uzbekistan.

Over two billion people live in these regions and the benefits of improved regional connectivity cannot be underestimated.

Another motivation for the summit is explained well by Eldor Aripov, the director of the Institute for Strategic and Inter-Regional Studies. He said it's a forum where Uzbekistan suggested to "not focus on problems and not to focus on contradictions, but instead to focus on development projects in the areas of trade, transport, infrastructure development, and tourism."

The conference was attended by delegations from Central and South Asia, as well as by representatives from the US, Russia, the EU, business leaders and entrepreneurs.

Participants discussed how to make the region more interesting to global investors. Panel discussions spanned the transportation, trade, and cultural sectors. The future of Afghanistan was another focus point.

Ismatilla Irgashev, the Special Representative of the President of Uzbekistan on Afghanistan, explains that "the strategy is to turn Afghanistan into a kind of bridge that will unite Central and South Asia."

The construction of a new electricity power line that will bring energy to Afghanistan is one such project.

Sherzod Khodjaev, the Deputy Minister of Energy in Uzbekistan, told us that Uzbekistan actively supplies electricity to the Afghan market and their goal is "to increase the volume of supplies more than twofold once the construction of the Surham-Pulikhumri line is completed".

Diversification of transport networks is one of the key tasks of the landlocked countries of Central Asia.

Connecting Central Asia and South Asia is really important in the sense that landlocked countries such as Uzbekistan can reach ports and the sea; so that it becomes a part of the global supply chain and trade network

Landlocked Uzbekistan is expanding new transportation corridors and recently initiated a new project, the construction of the Mazar-i-Sharif-Kabul-Peshawar railway that will go through Afghanistan to Pakistan.

By connecting South and Central Asia, it is expected to stimulate the Afghan economy, open a direct path to Pakistani seaports and a route to India.

In regards to this railway in the making, Aripov states that "if you look at the map, Uzbekistan and the countries of Central Asia will actually have the shortest path to sea lanes".

Uzbek businessmen hope that when the Kabul corridor railway is constructed it will open up the potential for businesses. They expect it will significantly reduce transportation costs and shorten paths for goods.

One such businessman, Amrullo Sadullokh, gives us a good and basic example of this potential. He explains that when Uzbekistan imports potatoes from Pakistan, it spends a lot on logistics and as a result, the goods become more expensive. Sadullokh expects that when this road is open, it will be "very beneficial for Uzbekistan, as well as for Pakistan and Afghanistan".

One of the key goals of the Tashkent Conference is to restore the historical trade routes that have linked the countries of Central and South Asia since ancient times.