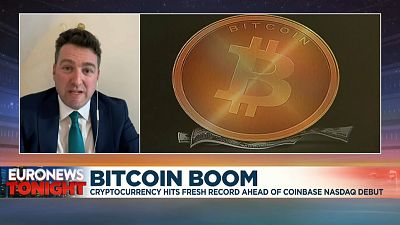 Bitcoin hit a fresh record on Tuesday of more than $63,000 (more than €52,000) ahead of Wednesday's stock market debut for Coinbase, one of the world's biggest cryptocurrency exchanges.

The price of Bitcoin has more than doubled since the beginning of the year, with mainstream investors jumping on the bandwagon.

Cryptocurrencies are also proving a big hit in countries where inflation is rampant, and investors see them as a potential safe haven – most recently in Turkey, where the lira tanked last month after President Recep Tayyip Erdogan's shock decision to sack the central bank governor.

Euronews business analyst Guy Shone breaks down how popular bitcoin and other cryptocurrencies are around the world.

Watch in the video player above.

How Bitcoin went from cowboy currency to commonplace