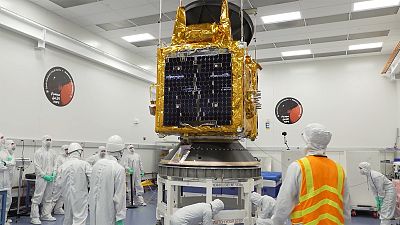 It’s been a busy few years for the United Arab Emirates Space programme.

They’ve developed and launched a series of satellites and last year they sent the first Emirati Astronaut Hazza Al Maansouri to the International Space Station.

Now the Emirates has its gaze firmly fixed on Mars. And the culmination of all their efforts is the Hope Probe which is destined to orbit the red planet.

The UAE's Minister of State for Advanced Sciences Sarah Al Amiri told Euronews why understanding the history of Mars could help humanity plan for the future.

"What the Emirates Mars mission will provide is actual data throughout an entire year everywhere in Mars," she said.

"Climate change is one of the reasons that Mars has transformed and understanding better the weather dynamics and the atmospheric changes on Mars gives us one piece of the puzzle on what happened to Mars. Why it's got into the state that it's at today."

Now with climate change posing one of the greatest threats humanity has ever faced, Al Amiri believes studying the red planet will help shed some light on what lies in store for our own planet.

Looking to Mars to understand Earth

Reaching Mars will also mean big changes for the UAE back here on Earth.

Myriad scientific instruments will be used to gather all the new martian data, including an infra-red spectrometer to study the lower atmosphere’s cloud systems, carbon dioxide cycles and temperatures.

Scientists will also rely on an explore imager for High Resolution images and to better understand UV rays in the lower atmosphere and an Ultraviolet spectrometer which looks at how quickly hydrogen and oxygen escape Mars’ upper atmosphere.

For Omran Sharaf, the project manager of the Emirates Mars Mission, learning from Mars is a good way to address challenges faced in the UAE.

"It’s about addressing our national challenges when it comes to water, food and energy resources. And it’s about generating knowledge that will serve humanity," he said.

"The UAE government wanted to see a big shift in the ecosystem that we have when it comes to building a creative, competitive and innovative knowledge-based economy.

"And it looked at space as a means to do that. And the Emirates Mars mission is the catalyst for that big shift and change."

In the so-called 'clean room' where works are carried out on the probe under meticulous conditions, we had a chance to take a closer look with Mission Systems Engineer Mohsen Alawadhi.

He took Euronews through all the mechanics that will hopefully guide the craft to the surface of Mars.

"We have a total of three low gain antennas and one high gain antenna," he said. "So this is mainly used when we are far away from Earth and we're trying to contact the spacecraft.

"We have four solar panels providing the main source of energy for the spacecraft. We have a battery that will restore it for cases like when we don't have sun. At the bottom, we have two star trackers that are kind of telling the spacecraft where it is."

The probe will spend 7 months making the journey to Mars, and then the really hair-raising time begins.

Entering Mars' orbit is no mean feat, and with a delay of almost 30 minutes between the control room on earth and the probe in orbit, the spacecraft must act with a lot of autonomy.

Alawadhi explained just how tricky this manoeuvre could prove.

"The spacecraft will look away from Mars and point the thrusters towards it and basically brake," he said. "If we go too fast or too slow, we'll miss it. If we don't hit where we want, we probably crash into Mars. So it's a really critical thing and that's why half of the fuel that we have will be used during that phase."

Given the immense distance between Earth and Mars, communication is tricky. How they get around that problem requires a huge amount of trust in the technology.

According to Alawadhi: "It takes 12 minutes to almost half an hour to talk to the spacecraft. So you’re not commanding it, you’re just programming it in a certain way and autonomously it will say what it has to do. And we’re just crossing fingers that it’s doing what it’s supposed to do."

In theory, space exploration history will be made 20 minutes before anyone on Earth realises it.

Beyond their wildest dreams

According to Al Amiri, the mission's progress is beyond anything anyone could have imagined.

"It's something unlike anything that we’ve ever dreamt or realised we can dream of working on. It’s the final countdown, we’re getting to launch in July," she told Euronews.

"It’s the challenges of getting into Mars’ orbit and the exciting part is finding new findings, new Science, new results."

For now, all they can do is wait and hope.

Until the launch date in July, they'll be carrying out rigorous checks on all the equipment and readying the probe for its voyage into outer space.

It'll soon become clear whether the young Emirati scientists and engineers working on the mission will be one step closer to realising their hopes.

Using technology to make it rain