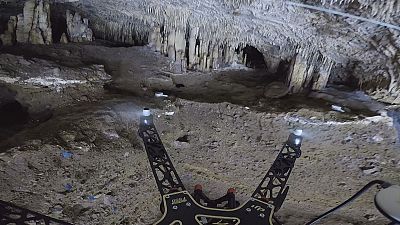 Without GPS, we lose stabilization of the drone; it is very complicated.

“Scladina Cave is an archaeological site in Belgium. According to prehistorians, Neanderthal men and women used this space more than 1,000 centuries ago.

“It’s with very modern technology, such as drones, that researchers are currently looking for ways to better study, protect and promote the site.”

At Scladina cave they’re testing their secret weapon, a drone, in a prehistoric environment.

The use of a drone in such a complex site is full of challenges – and rewards.

Frederic Bezombes, Mechatronic Engineer, Liverpool John Moores University:
“This is a very special environment. As we are inside the cave, there is no GPS signal. Without GPS, we lose stabilization of the drone; it is very complicated. We must be very reactive during the control of the flight.

“In normal 3D mapping, with cameras on the ground, you always have gaps; as you work with the same perspective you are never able to accurately map what is above. But with a drone equipped with cameras with wide angles we’re able to fill those gaps in just one go.”

The drone is equipped with three cameras that record every corner of the cave. Each object is mapped in its own archaeological context.

Engineers are actively helped by archaeologists, for whom the pictures obtained are full of promise.

Post-capture processing allows for the development of digital 3D representations.

Isabelle De Groote, Paleoanthropoligist, John Moores University / Digiart Project Coordinator:
“With drones, you don’t need access to the actual sites. You can cover large areas without having to walk on what may be very fragile areas. You can also cover lots and lots of ground in a very short space of time.”

For that they are using not only visual material from drones but also sophisticated scans of small cultural objects.

Frederic Precioso, Computer Scientist, Nice Sophia Antipolis University:
“First we capture the 3D data; by that we extract the particular characteristics of a given cultural object. And thanks to that characterization, of the 3D model, we’ll be able to link that object to similar objects displayed on other databases or on the Web.

“If these other objects are enriched with other complementary information, meta-data, multimedia, we are then able to link our object to this.”

The final goal, scientists say, is to offer citizens an interactive hand for a better, deeper understanding of cultural sites, particularly ones whose access is difficult or restricted, like Scladina Cave.

Kevin Di Modica:
“Those interested will be able to visit the cave in augmented reality and see the objects at the original place where they were found and dug out. And virtual reality will also allow people to see the whole interior of the site from their homes.”

Isabelle De Groote:
“Maybe we’ll make them (virtual visitors) feel like going to a different place, and discover a new site, and actually going to visit it for real. It’s about making it more accessible, making sure that cultural heritage is shared and is available to anyone.”

Takeaway: 3D in the air