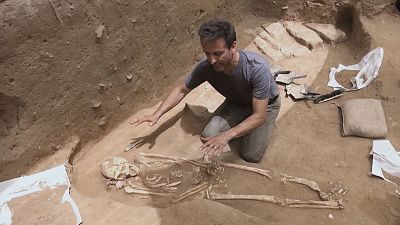 A team in Israel has unearthed an ancient cemetery, which it says will unravel the mystery of the Philistines.

We now know that this is Philistia, this is how Philistines treated their dead and it's the code book to decoding everything around us

DNA, radiocarbon and biological distance tests are being performed on bone samples found at the cemetery, dating from the 11th to 8th centuries BC, to help resolve a debate about the Philistines’ geographical origins.

Archaeologist Adam Aja, group supervisor at the Philistine Cemetery of Ashkelon outlined the significance of this discovery: “Never before have we found Philistines in a Philistine city.

“We guessed that there might be Philistines out there, but no one had found them in the core. Where do they come from? And now that we have the core we can compare (it) with everything. We now know that this is Philistia, this is how Philistines treated their dead and it’s the code book to decoding everything around us.”

In the bible, the Philistines are depicted as the ancient Israelites’ arch enemy – a foreign people who migrated from lands to the west and settled in five main cities in Philistia, in today’s southern Israel and the Gaza Strip.

Archaeologists have long believed the Philistines came from the Aegean region, based on the pottery found in excavations of Philistine sites.

But did the Philistines come from mainland Greece? The islands of Crete or Cyprus? Anatolia, in modern-day Turkey?

The excavation of the cemetery has also shed light on Philistine burial practices as Adam Aja explained: “A pattern began to emerge over the several seasons that we’ve been running here of the burial practices, things that we just never knew before about how the Philistines treated their dead.

“Many times we found some small ornaments on the body: earrings or necklaces, rings and bracelets, toe rings even – but for the most part it was a relatively simple set of objects: some perfume bottles placed near the face; some jars that probably held oil or wine or food near the legs.”

Who were Goliath's relatives? Archaeologists closer to uncovering the Philistines' secrets https://t.co/pLbkJq8DfTpic.twitter.com/5qAKQVg9XI

The discovery was made a few years ago but was only announced now at the close of a 30-year excavation project by the Leon Levy Expedition. It also involved a team of archaeologists from Harvard University, Boston College, Wheaton College in Illinois and Troy University in Alabama.

Artefacts from the cemetery are on display at the Rockefeller Archaeological Museum in Jerusalem.