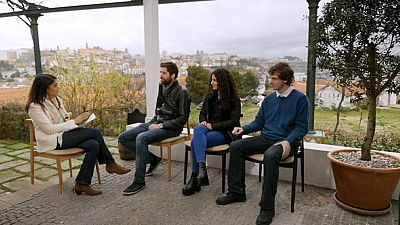 This week Real Economy looks at the efforts the EU is making to help young people get into the workplace.

Youth unemployment is a huge problem. It is getting better but very slowly and there are still huge differences between EU member countries such as Spain and Germany.

Nearly half of all young people who emigrate in search of work have a university degree. More often than not they do not want to leave their home country but feel as if they have no choice.

The organisation Eurofound says the EU and member states need to invest 50 billion euros in policies to help young people find employment, but that the alternative, doing nothing, could end up costing three times as much and creating a lost generation.

Real Economy visits two countries, Portugal and Ireland, who both suffer from ‘brain drain’ – when young educated people emigrate in search of work and sometimes never return, other than to visit family.

We speak to young people in the city of Porto about their hopes and dreams, and what they think of the help that governments are providing to get young people into employment.

And we also have a report from Dublin , Ireland, from an area where one scheme has led to four out of five young people being given an opportunity to get out of the destructive world of unemployment.

What are the COVID subvariants we should really care about?