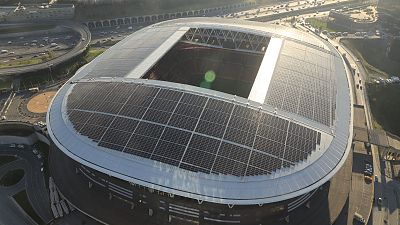 The solar energy produced from the panels provides up to 65 per cent of the stadium’s electricity use.   -   Copyright  Galatasaray Sports Club/Enerjisa
By Kristina Jovanovski  •  Updated: 03/10/2022

A legendary Turkish football club has found a way to cut its energy costs and make money from electricity while going green.

Galatasaray football club previously set a world record in March for the amount of megawatts produced by the stadium’s solar panels, earning it a place in the Guinness World Records.

The club and the energy company running the system, Enerjisa, were presented with a certificate acknowledging the feat of producing 4.2 megawatts from 10,404 panels on the roof of the Ali Sami Yen Spor Kompleksi Stadium in Istanbul.

Galatasaray are used to winning. They’re one of Turkey’s biggest four football clubs, alongside Beşiktaş, Fenerbahçe and Trabzonspor, pulling in around 25,000 to a match on average.

But with many Europeans worried about how to pay their energy bills, the title of most powerful solar-powered stadium sets an inspiring example beyond the sporting world.

According to the stadium’s director Ali Çelikkıran, who is an electric engineer by training, the panels’ energy savings equate to the energy use of 2,000 houses, and will cut 3,250 tonnes of carbon per year. In natural terms, he estimates that’s the same as saving around 200,000 trees over 25 years.

How much money has the Ali Sami Yen Stadium saved from its solar roof?

While the club has money to spend on players, it does not have much cash to invest in its energy system, so Çelikkıran was on the look-out for a way to cut costs.

“Nowadays, [whether] they want or not want, a big company must be an environmentalist because energy is very expensive,” the director tells Euronews Green.

The solar energy produced from the panels provides between 63 to 65 per cent of the stadium’s electricity use, with the rest coming from the municipal electricity provider.

While electricity prices have risen, the price for the solar energy - which the club buys from Enerjisa - has stayed the same, leading to savings of around €385,000 between January to August.

That was a big, but welcome, surprise.

The club thought it would take a few years for them to start seeing any savings after the solar panel system was installed on the 52,000 plus capacity stadium.

But the increased price of energy, along with an official inflation rate that is now more than 80 per cent, meant the club started saving money a couple of weeks after the system began running.

Increasing the use of domestic energy in Turkey also has geopolitical implications.

Turkey heavily relies on foreign sources for its energy; 45 per cent of its gas came from Russia last year.

A month after Russia’s full-scale invasion of Ukraine, Turkish President Recep Tayyip Erdogan said his country would not join western sanctions and could not forget its relations with Moscow. Turkey's use of Russian gas and its plans to build a nuclear power plant with Russia were examples he gave, according to the Hurriyet newspaper.

“We can’t ignore that. When I told this to [French President Emmanuel] Macron, even he said that I am right. We have to protect this sensitivity,” Erdogan said.

Relying on other countries for energy, especially after the Turkish lira lost 44 per cent of its value last year, means its foreign debt becomes even larger. Using domestic sources, on the other hand, would be less affected by the fluctuating lira.

“It would have a positive impact on Turkey’s current account benefits,” says Özgür Ünlühisarcikli, the Ankara office director of the German Marshall Fund.

Aside from cutting costs, solar energy is also leading to a new income source for Galatasaray, a heavily-decorated national sports club which won the 2000 UEFA Cup.

The club buys all the energy that is produced from the panels from Enerjisa, but with the stadium only fully using its lighting system for 150 hours during 25 matches a year, it gets more electricity than it needs so the rest is sold to the municipality.

Çelikkiran stated the club makes a large amount of money this way but wouldn’t divulge how much.

Why are solar panels such a good fit for Galatasaray's stadium?

It took about nine years for Çelikkiran’s solar energy vision to be realised.

During that time he talked to several companies and engineers until an Enerjisa director visited the stadium and agreed with him that solar panels were a viable option.

Çelikkiran says the stadium’s retractable roof had the right shape to take in sunlight and it could withstand the weight of thousands of panels.

The stadium’s retractable roof has the right shape to take in sunlight and can withstand the weight of thousands of panels.

While he believed it was important for other stadiums to switch to renewable energy too, he cautioned a city like London might not get enough sunlight to make solar panels the right option.

Clubs would also have to check whether their roofs could hold the weight of the panels and some stadiums, like Barcelona, only have a partial roof that might not have the space for them.

In nine years time, Galatasaray’s contract with Enerjisa ends and complete control will go to the club.

From then on, it won’t have to pay anyone else for the electricity, while continuing to make money from selling the extra energy the stadium doesn’t use.

Çelikkiran says his commitment to finding a way to use solar energy was driven by a desire to do a good job as the director of the stadium, but also as an environmentalist and father who wanted to decrease carbon emissions.

“I have two daughters and there is a future,” he says. “But we don’t use the Earth [well].”

Hydroponics: Inside the refugee camp growing veg without soil