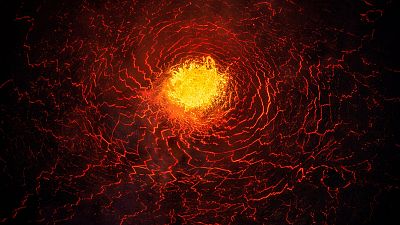 There’s something special about drone photography. Though aerial shots have been around for a while now, their ability to show us familiar sights from a completely new, surprising angle never gets old.

Every year, thousands of photographers from over a hundred countries around the world submit their best aerial shots to the annual Drone Photo Awards.

From a fiery volcano in Iceland to the rooftops of a historic neighbourhood in Denmark, these are the best shots from this year’s awards.

Stare straight into the eye of a volcano in Armand Sarlangue’s competition-winning shot.

The French photographer’s arresting image triumphed over thousands of entries for its capacity to capture a unique moment in nature. The photo portrays a secondary fissure a few hundred metres from the main crater of the Fagradalsffjall volcano in Iceland, captured on camera during a storm.

“What I see is a galaxy of fire exploding from the inside. An explosion of creation,” wrote Sarlangue on his Instagram profile, celebrating the victory at the prestigious photo awards.

Ukrainian photographer Serhiy Vovk won the urban category with his picturesque shot of the famous Kartoffelraekkerne neighbourhood in Oesterbro, Copenhagen.

The area was built in the late 1800s for working-class families, but has now become one of the most sought-after areas in the Danish capital.

Sleeping on a Boat, by Anindita Roy

A splash of green brightens up this shot by Bengali photographer Anindita Roy. She captured a rather idyllic-looking moment in the life of a boatman on the Buriganga River in Bangladesh’s capital Dhaka.

Fishermen often sleep on their small boats at night in the river’s port Sadarghat, which during the day is busy with the traffic of people moving across the Buriganga’s banks.

United we stand, together we fall.

In a seemingly endless sea of colourful flamingos, Iranian photographer Mehdi Mohebipour saw the solidarity between the birds who stick close to each other in order to protect themselves and the group.

The prize for the sports category went to Polish photographer Daniel Koszela.

He captured rows of skiers breaking the white stillness of the snow with their colourful sportswear, as they took part in the 46th edition of the Bieg Piastów event in Szklarska Poręba, Poland.

The spectacular meeting immortalised by Swiss photographer David Rouge in his nature category award-winning shot is that between the desert and the ocean.

As in a dream, the desert dunes of the Namib Desert meet the South Atlantic Ocean, forming this image that appears almost unreal.

In space-like darkness, workers busy themselves around sun- and star-like shapes.

It captures the hard work of labourers in a salt pan in Habra, India, where the salt is placed on circular lines to allow slow evaporation in the sun before being collected in baskets at the end of the day.

If there was such a thing as star gardeners, this image would likely be its perfect portrait.

This picture is so beautiful and dreamy that it looks more like a painting (or a highly Photoshopped image) than a simple photograph.

Polish photographer Krzysztof Krawczyk took this drone shot at night, when a daring bride climbed on top of a floating fallen tree, with stars reflected in the watery backdrop.

Where can I see the winners of this year’s Drone Photo Awards?

The winners of the Drone Photo Awards 2022 will be exhibited to the public in Siena, Italy, as part of the Siena Awards, which includes seven additional photographic exhibitions.

The photos will be exhibited from 1 October until 20 November.