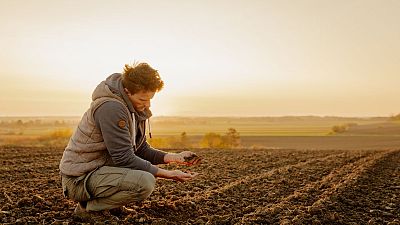 Solar power could one day be stored in the ground beneath our feet, if an “adventurous” new project to create a ‘soil battery’ succeeds.

The design - which uses earth’s teeming microbial life to transfer energy - is one of dozens of bright ideas that has just got a major funding boost from the UK government.

As with sand and water batteries, a plentiful natural resource is being called on by researchers at Cardiff University to help solve the problem of renewable energy storage.

UK Research and Innovation is investing £15 million (€16.9 million) in the nascent technology, along with 67 other projects that it recognises are ‘high risk’, but have a “potentially transformative impact”.

“The possible scale of that impact is really exciting,” lead researcher Dr Michael Harbottle tells Euronews Green. “To see something that's really quite novel, possibly having a big impact is what's driving us.”

He first got the idea from reading about a concrete battery which used a chemical process, and wondered whether a biochemical process might not have more to offer.

How can soil store solar energy?

Harbottle’s field of research is, as yet, an abstract one. But he’s not the first person to realise the potential of soil in this way.

“There are plenty of examples of people effectively just putting soil into a jar, putting a couple of electrodes in and connecting them together,” he says.

Throwing solar energy into the mix requires something more elaborate. The plan is to send electricity from solar panels to buried electrodes, thereby stimulating certain bacteria in the soil.

“If you make energy available to microorganisms, they’ll use it in some way to survive,” explains Harbottle. “Just like providing food, if you provide electrical energy, there are organisms who can use that to perform electrosynthesis, where they synthesise [combine] carbon-based molecules from carbon dioxide.”

A bit like photosynthesis - whereby plants take in CO2 and transform it in their cells - but all happening below ground. Electric power, CO2, action: the “bugs”, as Harbottle calls them, get to work using the energy to reduce the carbon dioxide and make a more complex molecule called acetate.

This acetate, which he describes as being the same sort of molecule found in vinegar minus the acid, acts as a chemical store of energy. When needed, another circuit (known as a microbial fuel cell) is switched on, which activates a different set of bacteria to break down the acetate.

These feasting bugs release electrons which flow through the circuit, providing electricity on demand. Just another strange stage in sunlight’s 150 million kilometre journey to Earth.

Soil could offer a subterranean alternative to lithium

Soil is incredibly diverse; one teaspoon contains more than 10,000 species of microbes. The researchers want to utilise some of the organisms that already exist, selecting the best ones for the job by creating optimal conditions for them.

“One advantage of the idea is it doesn't require resource-limited or hazardous chemicals like lithium that are used in other battery technologies,” says Harbottle. “It creates organic molecules that are often present in the soil anyway, that are produced naturally by microorganisms in smaller quantities.”

Acetate isn’t damaging, but could too much of the chemical harm other life forms in this rich ecosystem? Harbottle acknowledges that it might. Though the researchers have their sights on the deeper, wetter soil below the busiest top layers, the impact still needs to be explored.

“The way we envisage this is it's not going to hang around too long,” he adds. Unlike some long duration energy systems, the prototype will work on a daily basis, storing the sun’s energy for use at night.

What could soil batteries be used for?

In the long term, these batteries could be set up below fields of solar panels. But as the microbial fuel cells only supply low voltages for now, their use in relatively low power systems is more imminent.

“I’m a civil engineer by training, so I automatically think of some civil engineering type solutions,” says Harbottle. “Things that are maybe remote from the grid, but low power.” He points to sensors, lighting systems, communications for off-grid homes or highway infrastructure.

Eventually, the researchers - a cross-disciplinary team of geo environmental and electrical engineers - aim to scale up by joining hundreds of cells together to produce a far higher voltage.

In exploring the battery potential of soil, Harbottle’s team will also be looking into carbon storage in soil.

“If you're converting CO2 to a carbon based molecule, the molecules that don't get consumed by the microbial fuel cell may end up being [in the ground for some time,” he explains. “And effectively that's a way of pumping carbon dioxide into the ground.”

CO2 capture is the focus of a different UK government backed project, which tests whether micro-algae can be used to soak up some of the steelmaking industry’s huge footprint.

Another solution looks at launching an early warning system for rockfalls, which have been made more frequent by climate change.

Inspired by seagrass, a third will test the feasibility of filtering salt from saline water, thereby making more water available for crops.

“The adventurous thinking displayed in these new projects underlines the ingenuity and imagination of our research base, taking novel approaches to tackle major challenges,” says Professor Dame Lynn Gladden, executive chair of the Engineering and Physical Sciences Research Council (EPSRC) within UK Research and Innovation.