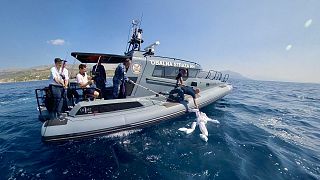 Europe’s coast guards face many risks to keep our seas secure and safe. Good coordination in an emergency can mean the difference between life and death. To continuously improve their skills and their efficiency, the guards partake in regular exercises such as COASTEX.

A distress call over the radio alerts the maritime rescue centres: two vessels have collided near the city of Split, suffering heavy damage. The emergency is life-threatening: witnesses saw at least one crew member fall overboard and vanish into the sea. Civilian search and rescue boats rush to the area, requesting the Navy to provide immediate assistance.

This concerns the safety of maritime traffic, which has increased significantly in recent decades, and according to all indicators, will keep increasing in the coming years. In addition, over the last year or two, the number of cyber-attacks has grown significantly, aimed at interfering with communication channels in some way and disabling certain infrastructures.

While the exercise scenario is fictional, crew members operate as though it were real, as they know this kind of accident can happen at any moment, and they must be prepared.

Surveillance airplanes, speedboats, constant communication via radio - a veritable ballet takes place to conduct the search and rescue of the missing crew member.

Croatia is a magnet for maritime tourism, and coast guards respond to dozens of real incidents of this kind every year.

The country is modernising its coastal patrol fleet, building a series of new vessels. The speedboats used in the exercises are some of the fastest in the Mediterranean Sea. They have been financed with European funding.

Equipped with high-tech cameras with powerful zoom lenses and infrared vision, the Croatian coast guards can now search for people lost at sea even in the dark. Until quite recently, that was impossible.

"In the past, ships would use radars and binoculars to locate missing people. However, this could only work during daylight hours. When the night fell, teams could only rely on radars which was a problem because a person in the water is not visible on the radars.

Vessels involved in the search and rescue would have to cease the operations and wait until dawn and sunrise. But now we can continue the operation through the night because we have a camera that sees in the dark,” he says.

According to the training scenario, the vessel collision caused a fuel leak. It's being removed by a specially equipped ship provided by the European Maritime Safety Agency. EMSA works in tandem with two other EU agencies, EFCA and Frontex, as well as all the European coast guard agencies, in the body that organises the COASTEX exercise.

EMSA's key responsibilities are enhancing maritime safety and security and preventing ship-produced pollution. The organisation, headquartered in Lisbon, was founded 20 years ago as a result of the Erika and Prestige oil tanker disasters.

"The response to oil pollution is still at the heart of our business at EMSA. We have 16 oil absorbing vessels chartered all around Europe, which are ready to complement the efforts of the national authorities in the case of oil pollution," says Maja Markovčić Kostelac, the Executive Director of EMSA.

The organisation also serves as a Europe-wide database of all vessels at sea: it centralises the information collected by the coastal EU member states to track some 150,000 ships present in European waters every single day.

European Maritime Safety Agency makes its data accessible to national authorities, so each country’s maritime services can quickly take action if need be.

"It's a huge volume of information. That information is used for many different purposes - search and rescue, pollution response, border control, maritime safety and security, but also for fishery control.

We look up the vessel and all the relevant information pertaining to it - what kind of gear is the vessel carrying? Based on that, we can better understand the behaviour of the vessel. For example - is it normal for this vessel with this kind of gear to be fishing in this particular area?"

The SafeSeaNet system operated by EMSA provides up to date information in real time on the vessels present in a country’s waters. If, for example, a fishing vessel seems to be operating illegally, the information is relayed to the national authorities, who may then investigate the vessels involved.

To ensure that these measures are consistent and fair in all EU waters, the European Fisheries Control Agency (EFCA) works to harmonise fishery controls.

That includes exchanging experiences through joint missions: inspectors from many countries work together onboard EFCA's iconic "Lundy Sentinel" vessel, that also took part in the exercise back in Croatia.

"We work with the member states in order to give this harmonised, effective fisheries control. It saves money, but it also saves time. All of us have limited resources, and it makes us much more effective," says Susan Steele, Executive Director of EFCA.

In this part of  COASTEX, a boat has been spotted fishing in a restricted area. After the trespassing vessel has been intercepted and secured for inspection by the Croatian coast guard, an EMSA camera drone took off from EFCA's "Lundy Sentinel" patrol ship, confirming that it is safe to send EFCA's multinational team to perform the inspection: an example of practical coordination between the national coast guard and the European agencies.

From saving lives at sea to containing oil spills and confronting illegal fishing: the odds are better when national coast guard services and European agencies join their forces against the common threats.

Polar opposite: How climate change is altering the Arctic?