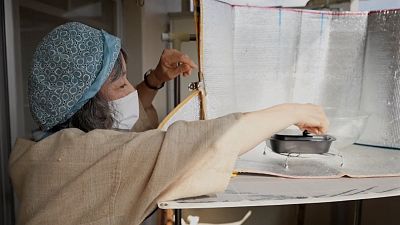 As the cost of living crisis spreads across Europe, we’re all desperately looking for ways to reduce our energy bills.

But 62-year-old Tokyo resident Chikako Fujii has already mastered the art. In fact, she hasn’t paid an electricity bill in 10 years.

And that’s not because she’s refused to pay.

Chikako doesn’t have a TV, oven, washing machine or air conditioning. The only electricals she does own are powered by four solar panels, fitted on her balcony.

Whilst Chikako’s way of living may sound impossible, what can we learn from her about how to reduce our own energy consumption?

What are the best ways to save energy?

"I started this lifestyle because of the Great East Japan Earthquake in 2011. Shortly after the quake, there were scheduled blackouts a few times here, so suddenly electricity was cut out and I felt I should have my own electricity prepared. So, I had one solar panel set up," says Chikako.

Chikako has grown her solar panel collection ever since. The panels generate an average of 1,000 watts on a sunny day, powering her electrical appliances and lighting for a few days.

When there’s less sun, Chikako rides an electricity-generating bike in the morning for 10 minutes which generates around 10 watts of electricity. She says that's enough to power a light bulb for three hours.

How to cook without electricity

On sunny days, a slice of fish can be cooked in around an hour and for a chunk of chicken breast it will take about an hour and a half

One of Chikako’s other big lifestyle changes is that she cooks her food using the sun’s power.

On sunny days, she leaves whatever food she wants to cook in black cooking pots on her balcony for a few hours.

"On sunny days, a slice of fish can be cooked in around an hour and for a chunk of chicken breast it will take about an hour and a half," she says.

To cook rice and bake a cake requires more heat so she uses a solar cooker. This contraption uses mirrors to concentrate the sun’s energy into one central spot where it gets hot enough to cook food.

She also uses candles to heat a stove top.

Is it easy to live a low-energy consumption lifestyle?

Chikako makes a living as a textile-dyeing artist and uses a footpedal-powered sewing machine for her projects.

Though Chikako says she only chooses activities she enjoys and can do sustainably, her way of life admittedly isn’t easy.

As the climate crisis raises temperatures and brings extreme heatwaves, Chikako has found it increasingly difficult to cope without air conditioning or chilled food and drinks. Recently she bought a small refrigerator which she powers from her solar panels.

Due to her age and the scorching summer heat, she has considered giving up on her eco lifestyle.

Chikako is more optimistic now as more clean energy is available in Japan compared to a decade ago.

Even if she does reconnect to the power grid, she says she will continue solar cooking even.

"Food cooked in the sun is delicious and it doesn't use any gas and electricity. And it can be used when a natural disaster hits. I want to continue solar-cooking and develop skills," she adds.

Watch the video above to learn more about Chikako’s off grid lifestyle.

Are e-scooters good for the planet?

Why I swapped my iPhone for a €600 ethical Fairphone