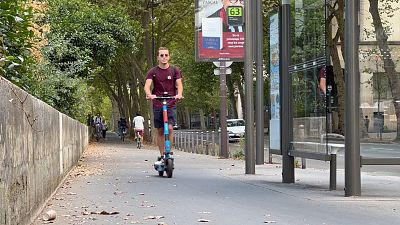 In just a few years, rented e-scooters have conquered Paris, like many cities across Europe. According to users, they're cheap, fast, pleasant, practical and of course, electric. But are they really good for the environment?

The Parisians we met didn't seem too sure.

"I think it's good because it only uses electricity," said one. "This generates carbon dioxide? I didn't know that," said another.

"Compared to the metro, I don't know if there's much difference!" a third said.

Well, there is a difference. A study carried out in Paris showed that at 0.6 kilos of CO2 per ten kilometres, e-scooters emit six times more than the metro, even if that is three times less than the car.

And only 13% of scooter journeys would otherwise have been done by car, taxi or bus. So e-scooters mainly replace less polluting means of transport.

So report author Anne de Bortoli, Carbon Neutrality Research Lead at Montreal Polytechnic, draws a somewhat negative conclusion on the impact of e-scooters, even if in Paris improvements have been made.

"Today, most operators have managed to reduce the impact of fleet management," she says.

"And as a result, the majority of greenhouse gas emissions come from the manufacture of the scooter. It has a small battery that has a carbon footprint that's not negligible, but the main issue is the aluminium frame that has a very, very high carbon footprint".

On top of this, there's user abuse. In Paris, Swans' Island has been renamed Scooters' Island by Raphaël and his father, magnet fishers who share their videos on social networks.

"We've pulled out at least 170 over three years or so," he says. "I don't know what they want to do with them, but I don't see the point of throwing them in the water.

"We lack studies on how these batteries corrode when they're left in the environment," says Jérôme Gaillardet, from l'Institut De Physique Du Globe De Paris.

"Probably the most dangerous for the environment are metals like nickel, lead, and mercury, which aren't present in huge quantities, but which exist in these batteries. But we shouldn't neglect the creation of what we call nanoparticles, which are small particles that carry metals within them and which can find their way into almost any living tissue and contaminate the entire food chain".

One thing is certain, the business of e-scooters is doing well in Europe with revenues expected to grow annually by around 15 per cent until 2026. But it will really help reduce transport pollution?

This will mainly depend on the efforts made by the companies involved.

For more on this story, watch the report in the media player above.