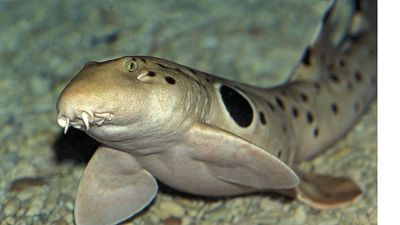 It sounds like the stuff of nightmares - but scientists are studying a shark that walks on land.

Young epaulette sharks are able to walk in and out of the water using their paddle-shaped fins. It is an evolution researchers describe as “breaking all the rules of survival.”

The reef-dwelling species can endure roughly two hours without any oxygen at all.

But you don’t have to move inland just yet - these rare creatures survive on worms, small fish and crustaceans, not humans.

What are walking sharks and where do they live?

Epaulette sharks live in reef flats around Australia’s Southern Great Barrier Reef, a habitat that can become completely isolated by the outgoing tide. Other species of walking shark can be found around Australia, Indonesia and Papua New Guinea.

When the tide changes, sharks can become trapped in shallow rock pools. To survive, the species evolved to cope without oxygen for up to two hours - and to move with its fins in a crawling motion.

This “breaks all the rules of survival” a statement from Florida Atlantic University declared.

Scientists there are investigating how walking and swimming abilities change in an epaulette shark’s early development.

When newly hatched, they survive from an internalised yolk sac, whereas slightly older juvenile sharks forage for their own food.

The yolk gives the newborns a bulging belly. But scientists found that body shape made little difference to how fast they could move.

"Studying epaulette shark locomotion allows us to understand this species’- and perhaps related species'- ability to move within and away from challenging conditions in their habitats," said Dr Marianne E. Porter, senior author of the study.

The sharks use their walking abilities to “manoeuvre into small reef crevices to avoid aerial and aquatic predators,” she said. This is also how they forage for prey.

The shark’s walking capabilities are linked to “challenging environmental conditions.”

Dr Porter is now calling for further investigation into how climate change will alter these conditions in the future.