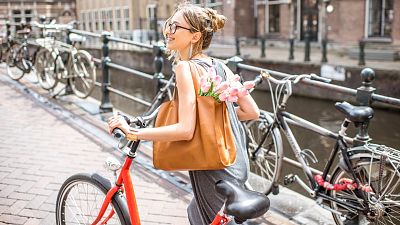 A woman with a bike in Amsterdam. The Netherlands has some of the highest rates of cycling in the world.   -   Copyright  Canva
By Charlotte Elton  •  Updated: 22/08/2022

If everybody cycled as much as the Dutch, global carbon emissions would drop by nearly 700 million tonnes per year.

A new University of Southern Denmark study - published by the Communications Earth and Environment journal - has urged people to saddle up like they do in the Netherlands.

Dutch people cycle an average of 2.6 kilometres each per day. If this pattern was replicated worldwide, the study suggests, annual global carbon emissions would drop by 686 million tonnes.

This mammoth figure exceeds the entire carbon footprint of most countries, including the UK, Canada, Saudi Arabia and Australia.

“The significant untapped climate and health benefits of increasing bicycle use suggest an urgent need to promote sustainable bicycle use,” the authors conclude.

What are the environmental and health benefits of cycling?

There are plenty of reasons to get on your bike.

On an individual level, it is a great way to stay fit and healthy, staving off the chronic diseases associated with a sedentary lifestyle.

But it’s not just good for you - it’s great for the environment, too.

The transport sector accounts for a quarter of global fuel-related greenhouse gas emissions, with half coming from private vehicles, including passenger cars and trucks.

According to UK climate organisation Hubbub, 50 per cent of the journeys we take each day are less than 3.2 kilometres long - meaning they could feasibly be swapped out for bike rides.

How many people cycle worldwide?

But this doesn’t mean more people are cycling as a proportion of the global population. Bike journeys account for just five per cent of daily trips worldwide.

The study authors recognise that not everyone lives in a cycle-friendly place - but call for an “urgent” expansion of cycling infrastructure worldwide.

“Lessons learned from successful experiences in countries like Denmark and the Netherlands, particularly on the city level such as Copenhagen and Amsterdam, would be essential,” they write.

“These include but are not limited to, for example, proper bicycle lanes planning and construction, pro-bicycle education and culture, and policies to discourage car use through tax.”