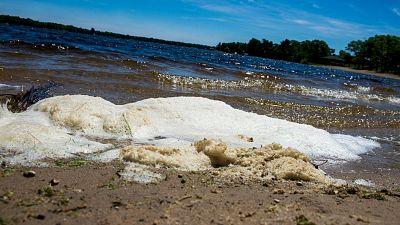 Scientists recently discovered unsafe levels of toxic forever chemicals in rainwater - even in remote locations like the Tibetan Plateau and Antarctica.

“There is nowhere on Earth where the rain would be safe to drink, according to the measurements that we have taken,” lead author of the study Ian Cousins told AFP.

He added that the chemicals are now “so persistent” that they may never disappear from the planet. We’ve passed what researchers call the “planetary boundary” for levels of forever chemicals.

So what exactly are these ubiquitous chemicals and is there anything we can do about PFAS pollution? We spoke to an expert to find out.

What are PFAS or ‘forever chemicals’?

Per- or poly-fluorinated alkyl substances (PFAS) are a large group of thousands of complex man-made chemicals. They are used in a range of products like non-stick frying pans, food packaging, firefighting foams and toiletries.

They became popular in the 1950s when the number of uses, names and applications for this group of chemicals quickly began to grow.

PFAS are known as forever chemicals because they persist in the environment for an incredibly long time.

They have chains of linked carbon and fluorine atoms. Because this carbon to fluorine bond is one of the strongest there is, some types of these chemicals won’t break down for more than 1,000 years.

What are the health risks of forever chemicals?

PFAS that have been studied so far have been connected to a range of health risks including hormone disruption, immune suppression, kidney cancer and fertility issues, according to Rebecca Fuoco, science communication officer at the Green Science Policy Institute.

Fuoco adds that forever chemicals that were phased out in products like non-stick pans have been replaced with other PFAS that have turned out to be similarly toxic.

Communication is key when it comes to the health risks associated with these chemicals. Fuoco recently co-authored an analysis that found government agencies - particularly in the US - often understate the evidence surrounding the toxicity of PFAS.

“Agencies often overemphasise the uncertainty of health harm across the board when in actuality there is robust evidence for outcomes like reduced vaccine responses and liver damage,” she explains.

What can be done about forever chemicals?

Because they are so persistent in the environment, cleaning up PFAS contamination is likely to be expensive and take decades or more. Replacing them with alternative chemicals that turn out to be similarly toxic isn’t the answer either.

“By avoiding the entire class of PFAS,” Fuoco adds, “we can avoid further rounds of replacing a banned substance with a chemical cousin which is also later found to be harmful.”

We are already doing some things right. Safety guidelines for levels of these chemicals have been tightened significantly in the last 20 years as we’ve discovered their toxicity - many are millions of times lower than they were in the early 2000s.

Despite the fact that they may never disappear from the planet, Cousins also told AFP that PFAS levels in human beings have actually dropped “quite significantly in the last 20 years”. He added that “ambient levels (of PFAS in the environment) have been the same for the past 20 years”.

Cousins believes this is because of the way that guidelines have changed since 2000.

Researchers have also been making steps in the right direction for removing these chemicals from the environment. Most current methods use extremely high temperatures, special chemicals or ultraviolet light. Some also create harmful byproducts that require extra steps to remove.

A recent study from the University of California Los Angles, however, has found a simple method for destroying some types of forever chemicals.

Using water heated to a relatively low temperature and inexpensive substances, the authors say they have created a chemical reaction that "gradually nibbled away at the molecule" until it was gone. There were no harmful byproducts and the uncomplicated process means there's no limit to how much water can be processed at once.

They say it could eventually make removing forever chemicals from drinking water easier in the future.

This reaction works for around a dozen PFAS but is a step in the right direction. The authors of the study say the success of their method could also help them discover weak spots in other types of PFAS.

As research continues, they hope their encouraging results will lead to further research on more ways to get rid of these nearly indestructible chemicals.

What is the EU doing about PFAS?

“We’re seeing more businesses and governments move to eliminate the class of PFAS in whole categories of products where they are non-essential,” Fuoco says.

“We need to turn off the tap on PFAS pollution, and to do that we need to stop all unnecessary use of PFAS as soon as possible.”

We need to turn off the tap on PFAS pollution, and to do that we need to stop all unnecessary use of PFAS as soon as possible.

In the EU, all PFAS are being targeted by the “great detox” - the largest ever ban of toxic chemicals recently announced by the bloc.

The plan, published back in April, aims to use existing laws to outlaw toxic substances linked to cancer, diabetes, infertility and other health problems. If this roadmap is implemented, it would see the use of PFAS restricted because of the time they take to degrade.

All of the substances will be put on a “rolling list” that will be reviewed and regularly updated to be considered for bans or restrictions by the European Chemicals Agency.