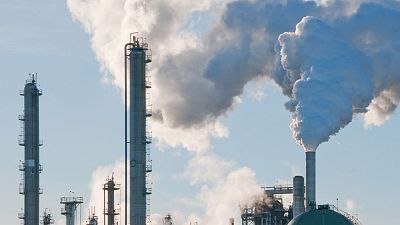 All of the pathways showed “delayed reductions in fossil fuel consumption,” the researchers wrote - making them “incompatible” with the global plan to keep emissions below 1.5°C.

“Fossil fuel companies claim that we can continue to burn oil and gas while keeping to the 1.5°C warming limit, and they cite their own scenarios as justification,” says Bill Hare, CEO and Senior Scientist at Climate Analytics.

“But our research shows that their pathways would bust the Paris Agreement. Even temporarily exceeding the 1.5°C warming would lead to catastrophic impacts and severely weaken our ability to adapt to climate change.”

What is the Paris climate agreement and why is it important?

Under the 2016 Paris Agreement, countries pledged to keep the global temperature “well below” 2°C above pre-industrial levels - and as close to 1.5°C as possible.

The stakes of meeting these targets are high.

The planet is already 1.1°C warmer than it was 150 years ago - and extreme weather events are growing more common every year.

Last month was the third warmest July on record, with many countries suffering from wildfires and drought.

As Europe and the UK sweltered under record-breaking temperatures last month, WMO Secretary-General Prof. Petteri Taalas described the heatwave as the “new normal.”

If we fail to prevent temperature rises, swathes of the world will become borderline uninhabitable.

At 1.5°C warming, about 14 per cent of Earth's population will be exposed to severe heatwaves at least once every five years, while at 2°C warming that number jumps to 37 per cent.

At present we are on a pathway to exceed 3°C of global warming by 2030.

How much will the globe warm up under current plans?

‘Decarbonisation’ pathways estimate how long it will take for the world to reach net zero by predicting future energy requirements.

The pathways published by big energy companies offer revealing insights, as they show when they assume fossil fuel demand will dip.

Energy company Equinor’s ‘Rebalance’ projection peaks at a median warming of 1.73°C above pre-industrial levels in 2060.

“Most of the scenarios we evaluated would be classified as inconsistent with the Paris Agreement as they fail to limit warming to “well below” 2 ̊C… and would exceed the 1.5 ̊C warming limit by a significant margin,” says Dr Robert Brecha, co-lead author of the study.