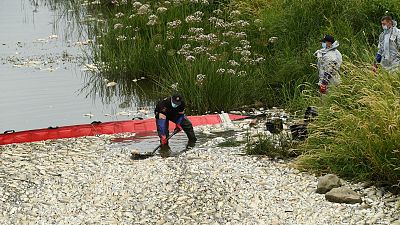 The culprit behind the ‘mass death sentence’ for the Oder River’s fish is still a mystery.   -   Copyright  REUTERS/Annegret Hilse
By Zuza Nazaruk  •  Updated: 17/08/2022

Half a tonne of dead fish per hour are currently flowing through the River Oder in Poland, alongside countless dead birds, beavers and mussels. The smell of rotting bodies and something even more sinister enshroud the riverbanks, while the toxin behind the poisoning remains a mystery.

By 14 August, Polish authorities and locals retrieved more than 20 tonnes of dead fish from the waterway - with some burning their hands in the process. Polish and German media have condemned the poisoning as an unprecedented ecological catastrophe. Experts estimate that the river will take at least 10 to 15 years to recover.

“This is a crime against nature, environment and humans,” Dr Sebastian Pilichowski, a biologist at the University of Zielona Góra, tells the Polish newspaper Gazeta Wyborcza. “It is a mass death sentence, and the death won’t be immediate. Fish fight for their lives in shallow shore water with an invisible enemy. They feel the pain.”

Where has been affected by the River Oder pollution?

The damage keeps travelling north with the flow of the river - known as the Oder in German and the Odra in Polish and Czech.

It has already reached the Szczecin Lagoon, bordering the two countries, and is expected to wreak havoc on the basin’s rich fish stocks. From there, the toxins will enter the Baltic Sea and travel eastwards on the current. They will likely affect the West Pomerania coast and some tourist sites, such as the seaside resort of Misdroy (Międzyzdroje).

Fishing is banned at least until October but fishermen doubt they will be able to work until the spring. “Nobody knows anything so far”, one fisherman told Gazeta Wyborcza. Some fish onshore are so big they do not fit inside the trash bags. Such large specimens would typically make great catches but now it will take years before they reappear. Locals are already facing layoffs from fishing and tourism companies.

Unique nature reserves including the Lower Odra Valley Landscape Park and the Warta Mouth National Park are also under threat. The former consists of a canal network where water is almost stagnant. If the toxins penetrate the canals, “all nature will be exterminated”, warns Ryszard Mićko, director of landscape parks in the West Pomeranian Voivodeship. “I cannot imagine that happening.”

The Warta Mouth National Park is home to over a dozen endangered species, such as the Eurasian teal and curlew. Although the river flows 3km from the park’s borders, birds feeding off fish cadavers mean that the toxins can penetrate the park’s food chain.

No substance or culprit has yet been identified

We still don’t know what substance caused the poisoning or when exactly it reached the river. But the general consensus is that it was a deliberate act.

“We are most likely dealing with a crime where a substance was introduced into the water that caused fish and other organisms to die. This is being verified at the moment,” deputy climate and environment minister Jacek Ozdoba told Polish media.

As the Oder is a massive river, the spill had to be very large or the toxin very potent.

“As the Oder is a massive river, the spill had to be very large or the toxin very potent,” explains professor Jan Marcin Węsławski, marine biologist and director of the Institute of Oceanology of the Polish Academy of Sciences.

Until 11 August, the prime suspect was mesitylene, an industrial solvent found in two samples but not detected anymore after 1 August. Then, German researchers detected mercury levels so high “they could not define the scale.” That theory is still debated.

Although Polish authorities found no more mercury after Thursday, their German counterparts discovered high concentrations. The Polish samples came from the main current while German researchers took theirs in more stagnant water. But most investigators agree that mercury alone does not explain the die-offs, especially as the concentration dropped to exceeded but not beyond-scale levels.

Now some think that high salinity from industrially produced salts is to blame. Such substances can be toxic in themselves but highly saline water can also temporarily release heavy metals from riverbeds, explaining the presence of mercury.

District prosecutor Wroclaw has opened a special unit to investigate the spill, and tests in companies located alongside the river are underway. The police are offering a prize of 1 million PLN (€215,000) for help in finding the culprit.

The Polish government is under fire over its slow response

The Polish government has received widespread criticism from scientists, environmentalists, opposition parties and German counterparts for reacting too slowly.

Fishermen first noticed dead fish in waters near Oława, about 400 kilometres away from the sea, three weeks ago on 25 July. The mayor of Oława, Tomasz Frischmann, alerted the provincial governor of Lower Silesia Voivodeship, Jarosław Obremski, on 1 August. Obremski had been on holiday since 28 July and did not return to help curb the catastrophe, prompting opposition politicians to call for his dismissal.

Małgorzata Tracz, an MP from the opposition Green party, alerted local and regional authorities on 3 August. She reached out to Polish Water, the government body responsible for inland surface waters, and the president of Wrocław, among others. No one, reportedly, answered her.

The government responded two weeks later after the first fish were found in Oława. On 11 August, defence minister Mariusz Błaszczak announced that 150 soldiers were being sent to assist in cleaning up the river and setting up barriers to catch the flows of dead fish.

An icebreaker joined the clean-up efforts on 15 August. Its special task is to generate waves so that dead fish float up from the riverbed. Citizens undertook their own clean-up initiatives as well.

It also took until Friday for the government to issue a warning urging people to stay away from the river. So far, hospitals have not received any victims of poisoning, although some people who took out fish with no protective gear have burned hands. One dog that swam in the river in Wrocław had to be treated for acute poisoning.

Polish Prime Minister Mateusz Morawiecki dismissed both the main inspector for environmental protection and the head of Polish Waters on 12 August.

The Greens opposition party filed a notion to dismiss all five governors of Voivodeships alongside Oder on 15 August. “They had the tools to prevent the poison from spilling all over Western Poland,” Greens leader Urszula Zielińska stated. “Nothing was done for 17 days.”

How have scientists reacted to the ecological catastrophe?

The issue has been notably absent from state TV channel TVP. To several scientists, the poisoning exposes flaws in Poland’s water monitoring system.

“This is a scandal,” says Węsławski. “Our waters are only checked a few times a year, while it should happen a few times per day.”

Reliable information on the state of the crisis is therefore lacking. There is no clear news on whether other organisms - such as shellfish beyond mussels, plants and plankton - were also affected, for example. But this information is crucial for identifying the toxin and understanding how fast the river can recover.

“You would want to have honest, current, full results from the government, ideally with explanations for those who did not study hydrobiology. Then, the conclusions and a repair plan. But we’ve got what we’ve got,” writes biologist and ecologist Marta Jermaczek-Sitak.

German authorities do not share Jermaczek-Sitak’s stoicism. Officials accused their Polish counterparts of breaking international law by not sharing news of the poisoning. The German side learned about the crisis on 9 August, from a river barge captain.

Warsaw only officially let Berlin know on 11 August, when German researchers had already detected mercury in the river samples. A few tonnes of dead fish had already washed up on the German river shores, where similar barriers for catching cadavers started appearing yesterday (15 August).

Constitutional tribunal judge Krystyna Pawłowicz, a conservative installed by the ruling party, even suggested that the Germans poisoned the river. Although the claim literally reverses the river, it goes with the flow of the strained Polish-German relations.

Is there still hope for the Oder River?

The Oder River is Poland’s second-largest. It starts in Czechia and flows through Poland on the border with Germany into the Baltic Sea. In healthy times, the river hosts more than 40 fish species.

As well as participating in clean-ups and looking for the culprit, the Polish environmental community is trying to keep up their spirits. Lower levels of mercury than initially found are great news. The fact that the incident occurred after most **birds**’ breeding season passed is another source of cautious optimism.

Prof. Węsławski also points to nature’s resilience. “Odra isn’t dead yet,” he says. “Perhaps we might not be able to use it for a while but every ecosystem builds back. Perhaps in a different form but it will build back.”