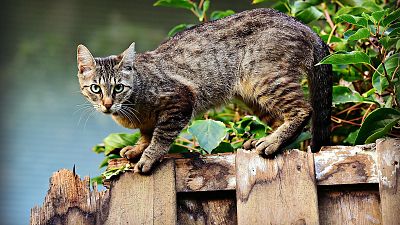 Pet owners in a southwest German town have been allowed to let their cats outdoors again after a temporary curfew was lifted.

Authorities in the town of Walldorf introduced the measure in May to protect a rare bird during its breeding season.

But the unique lockdown ended two weeks ahead of schedule on Monday.

Why was there a cat curfew in Germany?

The cat curfew was designed to help save the Crested Lark, whose population in Western Europe has declined sharply in recent decades.

Owners risked a fine of €500 if their cat was found roaming freely outside without a leash. They faced a further penalty of up to €50,000 if their pet injured or killed a crested lark.

"Due to this year's weather conditions, the breeding and development of the young crested lark is already so far advanced," authorities in the region of Rhine-Neckar said in a statement.

"This year, a good two weeks earlier than predicted, no significant danger to the young birds from free-roaming cats is to be expected."

“Suddenly preventing cats that are used to going outside from doing so, means immense restrictions and stress for the animals,” Deutscher Tierschutzbund told Euronews Green.

A similar curfew is still expected to be introduced each summer until 2025.

"Outdoor cats are one of several factors with regard to the problem of the crested lark," local authorities said.

"But in Walldorf, they are not an insignificant factor due to the proximity to the settlement, which is why measures are also necessary with regard to the cats."

"Since the crested lark is threatened with extinction, cats pose a particular threat and the measure is suitable, necessary and appropriate."

Australian cats in fight for freedom against local city councillor

What’s worse for the climate crisis: Your child or your pet?

Why do conservationists want to bring big cats back in Scotland?